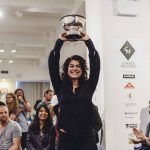 We have a new Coffee Masters champion, and her name is Erika Vonie. Since first stepping on to the coffee competition stage in 2014, this is Vonie’s first championship win, and it was hard-fought, requiring five-plus hours of total stage time throughout the weekend and a nail-biting head to head finale against Agnieska Rojewska of Poland, another seasoned (and quite decorated) competitor.

Vonie and Rojewska had never met before the New York Coffee Masters competition, which Rojewska describes as being “a fight but [a] friendly one.” That competitive camaraderie was embodied in a moment I observed from the audience, leading into the final round. Rojewska had already advanced; Vonie was waiting to hear the result of her performance against Christos Andrews (of Seattle’s Ghost Note Coffee) in the semifinal round. The future finalists stood together as announcements neared, chatting about their mutual love for Darth Vader (whom Rojewska likes to create in lattes and Vonie sometimes embodies), seeming genuinely excited at the prospect of competing against one another. “[I became] immediately infatuated with Aga,” Vonie tells me. “Even if I got knocked out in the first round, that connection would still have become a highlight of the weekend. She kicks so much ass, and made it to easy to connect through her amazing sense of humor and her beyond-obvious level of talent.” This feeling of connection and support between competitors at the Coffee Masters was palpable, and remarkable to me. I’m typically a spectator at barista competitions, where the finalists tend to be mostly male, and the feeling in the room is a bit more self-serious.

The two NYCM finalists have also competed at the national level of barista competitions in their respective home countries, with Rojewska having twice achieved the national title in Poland. In both Europe and the United States, the balance of assumed male and female national competitors (there is no other official option for those who identify outside of the perceived gender binary) is skewed toward the men, a trend which extends to the World Barista Championship (WBC) as well. A leading voice on this topic is Cerianne Bury, who has written extensively on the trend of women not competing, and those who do compete not advancing, in officially sanctioned barista competition tournaments. One potential aspect Bury identifies as an element of competition that could change a competitor’s performance is gender; specifically whether you are competing against someone of your same gender or someone who identifies differently. I asked Erika Vonie: did competing in the finals against someone who also identifies as female make a difference? She responded by talking to me about an earlier competition experience running cross country in high school, which she described as being akin to running through the woods with a pack of girls. “[W]e were all pushing ourselves harder, feeding off each other’s energies when we felt low. We were all racing against AND with each other simultaneously. So my sense of competition with women is a camaraderie. Surround yourself with a powerful women who keep pushing you as hard and as fast as you can go, because ultimately, we all benefit the better we are.”

In discussing her feelings on competing against men, the words “must destroy” and “dominate” came up. “I often have felt like the lone woman when it comes to these competitions, because I have been,” says Vonie. “From the jump my team has always been men, as they are my employers, coaches, and fellow competitors.” Being the “lone woman” in a sea of male-identified competitors seems like a less-than-ideal scenario. But the Coffee Masters final felt different; perhaps it had to do with the gender of her opponent in the final, but it could also be a result of the competition format itself. The experience of competing in the Coffee Masters is vastly different than competing in a barista competition, something both NYC finalists expressed to me at length. “I almost never talk to my fellow competitors at USBC this much,” Vonie told me, adding, “it’s so serious and there’s so much heartbreak. It’s very hard being a normal person during [barista] competitions.” Rojewska echoed those same sentiments. “In Polish championship we know each other for years,” she said. “We compete together many times so we are friends, but there is always a lot of stress in the back room.”

Which is not to say it’s a stress-free environment at the Masters. There’s a $5,000 cash prize at stake, for starters—Vonie is using her winnings to start up her own coffee roasting project. But the format of Coffee Masters seems to work as a catalyst for making connections with your fellow competitors. This in turn allows those competitors to feel a bit more at ease on stage as a result. Elsewhere in her critical work on the subject, Cerianne Bury identifies one of the biggest issues facing the barista competition circuit: there is little-to-no correction for cognitive bias in judging. She discusses that the things we like or expect to see from competitors differ between male and female competitors, and that these expectations may ultimately color the scoresheets, especially in the points allotted for vague concepts like “professionalism” and “appropriate apparel.” Vonie has been marked down in the past for issues relating to her clothing on stage—a pretty obvious choke point for latent bias and in-group favoritism to creep in. “If the length of my skirt makes you think I’m less professional than my panted competitors,” Vonie tells me, “then maybe you shouldn’t judge, because you’re obviously judging the wrong things.”

There are no such point scores allotted at the Coffee Masters, where instead the available bonus points for categories like “overall impression” and “charisma” are judged on the competitor’s ability to talk at length with their judges about the intricacies of their routine, or serve coffee to the watching audience during down time. It might be a coincidence that competitors like Erika Vonie and Aga Rojewska—technically gifted baristas at the top of their field—would reach finals in an event like Coffee Masters, instead of bogging down on sexist nonsense like skirt length in the US Barista Championship. Vonie with Ezra Baker of Share Coffee, Vonie’s coffee partner for the signature drink round.

But whatever the reason behind Vonie and Rojewska’s individual successes, and Vonie’s eventual win, the fact that female-identifying (and queer, and non-binary) competitors are excelling at the Coffee Masters is a win-win for everyone. It’s both important and fun, as anyone who witnessed the thrilling two hour final battle between Vonie and Rojewska in New York can attest.

Either competitor would have made a great champion, and yet, there’s still miles to go. It is 2017 and there’s never been a female-identified World Barista Champion. Meanwhile on the Coffee Masters stage, your new champion is a woman set to start up her own roasting company with the prize money, and the event can still do better by empowering, mentoring, and coaching more competitors from backgrounds underrepresented on the stage. I think the 2017 Coffee Masters finals at the New York Coffee festival was an important moment for the wider coffee culture, and I can’t wait to see where it goes next.

Bailey Arnold is a coffee professional based in New York City. This is Bailey Arnold’s first feature for Sprudge Media Network.