Where To Get Coffee In Newport Beach, California 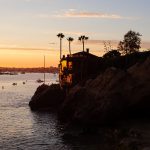 Newport Beach is basically the California dream, what most people imagine when they think of California: long, white beaches with rolling waves; every car on the Pacific Coast Highway (PCH) adorned with at least one surfboard; Kobe Bryant lives down the road from Dad’s Original frozen banana stand, which may remind you of a similarly named fictitious frozen fruit stand of Arrested Development fame. The television drama The OC, once popular among American youths—I’ve been told—was also set in Newport.

But Newport Beach, and its slightly inland neighbor Costa Mesa, is also another kind of dream—a sleepless, caffeinated one. Already home to standouts such as micro-roaster Portola Coffee Lab and former build-out Hopper & Burr, among other reputable coffee establishments, the two arguably coolest cities in Orange County have undergone something of a coffee renaissance over the past few years. Now, what was once a veritable specialty coffee desert is home to enough quality shops to keep an intrepid coffee crawler busy for days. Below is a sampling of some of our favorites, and if you need a snack break from all the flat whites in town, seriously, go to Dad’s. Bonnie Williams and her husband, Oliver, opened Vacancy Coffee on the sleepy, northern side of Newport, where the city gives way to Huntington Beach. She describes the area as idyllic—right along PCH, next to a dog beach, just a stone’s throw to Frog House. But before Vacancy arrived, the neighborhood was crying out for a spot to grab coffee.

“There’s a huge residential population there,” she says. A Gold Coast native, she wanted to re-create a welcoming takeout cafe that could serve locals as well as those coming to the beach for a surf, or commuting north in the mornings. “It’s a very common model where we’re from, where you’re walking along the beach and stop in and order your coffee,” she says. “So we knew that model worked. Customers love it for the vibe alone, and then the coffee is killer on top of that.” Vacancy serves Toby’s Estate as its house roaster, but has featured nearby Common Room Roasters on drip as well.

“The more people you get excited and dialed into a scene, which in our case is good coffee, the better it is for everyone,” she adds about the local community. “Everyone’s been really friendly and excited there are more and more people who are wanting to offer what we’re offering.” “We’ve been open for two months now,” Trinh says. “Right now, we’re serving a lot of members of the neighborhood. There’s been an insanely positive community reaction. The purpose of the name was to open up conversations.”

Bad Coffee began as a pop-up inside a clothing store last October, but after a brush with a health inspector, Trinh decided he had to relocate to his own brick-and-mortar location. Thus, Bad Coffee began with Trinh taking over the lease from Hidden House Coffee, which was closing down to focus on other locations. Trinh had worked at the nearby Portola Coffee Roasters for two years before branching off on his own and has deep coffee knowledge to back up his bad ambitions. His shop operates as a multi-roaster, featuring a rotation of companies that would otherwise be hard to come by in Southern California. Right now, Bad Coffee features Brandywine Coffee Roasters, Color Coffee Roasters, and King State.

Trinh doesn’t yet know where Bad Coffee fits into the larger Orange County coffee scene but is thrilled at the response it has gotten so far. It raises the question: With such bad coffee, who’d ever want to be good? Kyle Kennelly and Becca Mantei grew up in Orange County and met each other shortly before moving to the Bay Area for college. There, the couple says they were spoiled by the glut of world-class roasters in San Francisco and the East Bay, so when they moved back to Southern California after graduation, they found themselves with no place, apart from Portola, to get a cup of coffee. Along with fellow OC native and Sightglass veteran Aaron Dorff, the three built Daydream from the ground up, converting a blank canvas of a warehouse into, well, a dream, complete with a unique hand-constructed bar. Half–surf shop, half-cafe, Daydream is the next of kin in a long line of businesses that combine the two industries. “There’s such overlap between specialty coffee and surfing,” Kennelly, who has been surfing since he was eight, says. “If I’m going to schedule a morning surf with friends, we meet at a coffee shop. You hang out, shoot the shit with whoever’s working, figure out what’s happening wave-wise and then go. It’s just part of our morning process.” Mantei adds that everything from the brands they sell to the coffee they serve has been elevated; Daydream is the only place in the county where you’ll find Sightglass. “We had the space for it,” Kennelly says. “Why not fill it with everything we love? That’s one thing you do have down here that you don’t have in the Bay Area: space.” Located in the lobby of Costa Mesa co-working space FLDWRK, Neat Coffee opened in October 2015. It’s the oldest shop in this guide, and as such its owner, Ally Garvin, has been around to see her community expand over the past two years.

“There’s definitely been a change in people’s expectations for coffee,” Garvin says. “People are willing to pay more for better coffee, and realizing they like quality over convenience. It’s been cool to see that shift.” Neat serves Stumptown Coffee Roasters and local favorite Arcade Coffee Roasters of Riverside.

Garvin caught the coffee bug while working for an NGO in Uganda while visiting a coffee farm. She was taken by the production process of bringing a bean from tree to mill to cup, and decided then that when she returned to the States she would open her own cafe. After working for years in shops around Orange County, including Sidecar, she took the plunge and opened Neat. “Most of my customers come from outside FLDWRK,” Garvin says. “We’re right off the freeway, we get a lot of college students, and also a lot of people who work in the surrounding office area.” In her mind, Costa Mesa—with other popular shops such as Hopper and Burr and Portola Coffee Roasters just a few minutes’ drive away—has become something of a coffee destination, and so says it’s not uncommon to have intrepid coffee crawlers come through her door in addition to the regulars. Opened in December in Newport Beach’s Lido Marina Village, Honor fills the need for quality coffee in the extremely upscale shopping center. Founder Ken Schultz got his start in Portland, Oregon, before moving down south. But walking in this white, soft-wood enclave, it’s hard to imagine the space is a product of anything but Newport itself. Every picture taken here seems ripped from a lifestyle magazine, whether of the in-house roasted coffee, freshly made doughnuts, marble countertops, or visiting bandana-sporting dogs. But with a Slayer up front and Diedrich in back, Honor backs up its image with serious coffee worth traveling for. KIT stands for Keep in Touch and was founded as a place to do just that by Eunice Hwang and Jee Shin last October. “We wanted to provide a space that keeps in touch with the community,” Hwang says, who grew up in Huntington Beach. While studying hospitality in college in the Midwest, she knew she wanted to come home to open a cafe after graduation. Through a mutual friend she met Shin, an experienced restaurateur who had previously opened Costa Mesa’s Milk and Honey and Birdie, at a time when both were looking for a space to open up a coffee shop. Now, KIT embodies the owners’ shared vision, a space whose coffee program is as strong as its food menu. This means that at KIT, you’ll find yourself ordering sweet matcha brulee or avocado toast alongside a coffee from Sacramento’s Temple Coffee Roasters, Heart Coffee Roasters, or Coava Coffee Roasters.

“We wanted a place that’s super-welcoming,” Hwang says. “To reach the person who’s afraid to enter specialty coffee shops all the way to the coffee connoisseurs.” So whether on a coffee crawl with friends or simply looking for a place to get a bite of toast and some homework done, KIT wants to keep in touch with you. The post Where To Get Coffee In Newport Beach, California appeared first on Sprudge.