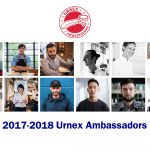 On Tuesday, Urnex officially announced their 2017 team of Global Ambassadors, a group of 12 national barista champions from around the world. Back for its third year, the Ambassador program from the coffee machine cleaning product maker features of a roster of well-known names amongst the global competition circuit.

Through a series of events taking place over the course of the next few months, the Urnex Ambassadors program seeks “to develop a community and network of world class competitive baristas, to support the professional interests and development of the Ambassadors by connecting them with local and global business partners,” and the tireless prusuit “to reinforce the importance of equipment cleaning in delivering championship quality coffee beverages.”

From the press release:

“Urnex has a long-standing commitment to supporting coffee competitions and an appreciation for the time, resources and energy that baristas dedicate toward participating and excelling in these events,” said Isaac Cohen, Vice President of Marketing at Urnex. “The Ambassador program is one small way we recognize their efforts and help inspire coffee professionals worldwide.”

Previous years’ Ambassadors have included all six of the 2016 World Barista Champion Berg Wu, 2016 WBC Runner-Up Yoshikazu Iwaze, 2016 US Barista Champion Lem Butler (along with every other 2016 WBC Finalist), and perennial WBC Finalist Maxwell Collonna-Dashwood. This year’s roster includes no fewer than 20 national championship wins as well as one current World Champion.

Let’s meet them now, shall we?

Congratulations to these 12 individuals. We look forward to seeing them compete at the 2017 World Barista Championship in Seoul this year in November or walking around the convention center in their Urnex grey zip-up jackets customized with each of their names stitched in. And I want one. It’s cold by the WBC stage. How can I be expected to live tweet when I have a slight chill? Urnex is an advertising partner on Sprudge Media Network.