Third Wave Water Will Appear On Shark Tank This Sunday 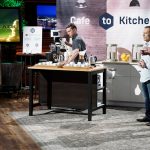 What are you doing on Sunday night? Watching football and drinking because the work week is about to begin? Probably. Instead of doing that, maybe flip over to ABC and watch Shark Tank, because this week’s episode features Third Wave Water.

That’s right, the makers of the capsules full of white powder (that now look like cigarette packs pull of white powder so there’s really no winning when your wife looks in your coffee cabinet) that “creates the perfect water for brewing coffee” when combine combined with distilled water are taking their brand to the Sharks.

And they’re bringing an insurance policy to make sure the coffee they serve their potential investors is on point. TWW owners Taylor Minor and Charles Nick have enlisted the help of Onyx Coffee Lab’s Dylan Siemens, the 2017 US Brewers Cup champion, to do all the brewing. It uhhhh seems a little unfair to have the reigning US champion of making coffee during your ad pitch because, let’s be honest, it ain’t just water keeping home users from making good coffee. But go get your money, Third Wave Water. I won’t tell if you won’t.

Tune in to ABC on Sunday night to see if Third Wave Water gets a nibble from any of the Sharks. Were I a betting man (which I am; I consider it to be one my best character traits), I’d put my money on the Cubez to take to it like a shark to water and buying a minority stake in the company. I think he’s going to try to figure out a way to combine it with Gatorade to keep Dirk Nowitzki healthy enough to play for the Mavericks forever.

The post Third Wave Water Will Appear On Shark Tank This Sunday appeared first on Sprudge.