The Women’s Petition Against Coffee Is 17th Century Spiciness 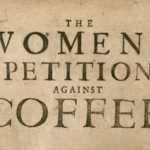 Since thanks to this current administration, we’re basically living in the past, we here in the Fourth Estate might as well follow suit. So breaking news, I guess: it’s the 1600’s and there’s a battle of the sexes going on and coffeehouses are at the center of it.

Well, probably not. A new article from Smithsonian.com looks back at The Women’s Petition Against Coffee, and it turns out, the pamphlet may not have been written by women or really be about coffee, but it’s got some 17th century spiciness. First, a little backstory. According to the Smithsonian, in the late 1600s coffeehouses became popular hangouts for “political men and writers” in London. They were “a new form of sociability that rose up in the years when England had no king,” and this sat none too well with Charles II, who went as far as trying to ban the institutions. This petition, according to historian Steve Pincus, was “written in order to help make coffeehouses unpopular as they were perceived as sites of political unrest.” Which is to say, it was probably neither written by women nor does it represents women’s interests. But hoo boy are there some very Old English zingers in there.

In the Women’s Petition, the supposed wives of coffee-drinkers bemoaned the fact that coffee-drinking was such an intellectual, effeminate pastime that it had rendered their husbands impotent and “as unfruitful as those deserts whence that unhappy berry is said to be brought.” (Coffee-growing lands are generally very rich and fertile.)

“For can any woman of sense or spirit endure with patience,” they wrote, “that when…she approaches the nuptial bed, expecting a man that … should answer the vigour of her flames, she on the contrary should only meet a bedful of bones, and hug a meager useless corpse?”

The women’s petition also complained that coffee made men too talkative: “they sup muddy water, and murmur insignificant notes till half a dozen of them out-babble an equal number of us at gossipping,” the anonymous authors write.

Never one to take being called a “bedful of bones” lying down (unless you’re into that sort of thing), a new pamphlet titled The Mens Answer to the Womens Petition Against Coffee was published in response. It argued that not only does it not make men impotent but that it dried up the “Crude Flatulent Humours” that made husbands all farty in bed.

Whether political subterfuge or actual rumblings of 17th century women in London, the Women’s Petition—and it’s Mens Response—is a darling look back at ye olde slings and arrows. And they serve as a challenge to us all: if you’re gonna shit talk, you better step up your vocab.

PS: if you’re looking for more old-is-new-again coffee news, check out Coffee’s Past Live on Twitter. I’m not sure how it’s all going to end, but right now the goat herder is getting up the courage to try the new berries himself.

*all media via Smithsonian.com

The post The Women’s Petition Against Coffee Is 17th Century Spiciness appeared first on Sprudge.