The Tale Of The Mindful Manager 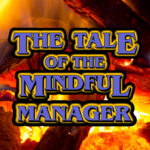 It starts slowly, these things, first with strict limits—I’ll only check it when I open my laptop, I’ll only look once an hour—until there you are, in your perfectly appointed city apartment, with a closet full of inoffensively expensive casual wear, and like 25 pairs of shoes, but you haven’t left in days—It has been two days now—because the thought of looking away from that screen is just…well it’s just hard. Being in the position of authority, everybody thinks they want it, you know, they think that’s how you mark success in this life, but it’s hard, believe me. A mindful manager has to watch over his shop, his keep, his flock, and they know it’s going on, they know to expect my calls and texts and for the cameras to zoom their little whirrrrr along the tracking mount as they move to drop off a cappuccino, or clean up after the kiddies, or get the mop and bucket out of the store closet which, it bears repeating, I’ve told them twenty flippin’ times—Twenty flippin’ times Josh—to make sure that you’re bleaching (two capfuls should do it) the bucket and mop and letting it sit in cold water at least twice a week, because I’m keeping track. I haven’t actually been into the shop in a few weeks, oh cockadoodie, what has it been, a week a month a year have I ever actually been into the shop? Of course I have, I am the owner and mindful manager of this establishment and I last visited the shop on the evening of October 15th, to install the latest QUAD VISION ALERT CAMERA system upgrade, because I was an early backer on Kickstarter, and they were really, really overdue for an upgrade, the lag in the last version made it basically unusable after 36 hours of consecutive view time, tops, and it’s normal, after all, to want to keep an eye on your shop, expected, really, part of the job description, dang it all to heck, and part of what it means to be an owner and a mindful manager.

“You have to log a certain amount of hours to qualify for the OctoView Media Interface, and sir, you have passed the threshold.” The news came by phone, which crashed my dang app, which meant I lost three whole transactions across the bar—cappuccino, hot chocolate, chai latte—three whole transactions without my watchful eye to make sure my staff starts every order with a smile, none of this surly freaking attitude crap you get at other cafes sometimes, and then you input the order into the digital register (which tracks back all transactions to my control center), then you make a little smalltalk with the guest, how’s your day, any plans for later? Then hand back any change, or twist the little terminal thingy around and let them decide if they want to tip you or not, and let them know we’ll call out their drinks when it’s ready. When the shop’s closed and the action slows down I isolate the audio of every name called out, and store these in daily select files for future reference.

The OctoView Media Interface allowed me eight screens, which was pretty good, but the company’s Augmented Viewer interface really represents a step forward in small business monitoring technology. The shop opens, I wake up, cram on the Viewer, and in pixel-perfect 360 degrees across 32 discretely placed cameras I’m given complete control over every aspect of my cafe. I can see all the tiny flaws, the golldang bathrooms need cleaning again, and you need to bus the dishes. You need to run the bus tub. I’m calling you now—David, you need to run the bus tub. I can track every last rag and cruller. I’m there, and when I do have to set it down (I sleep with it on most nights) I can enjoy a near-stereoscopic viewing experience from the updated tracking app on my phone, which is pretty good but not as good as using the Viewer.

Monitoring your staff is important. Watching over employees makes the difference between a sloppy boss-pal and a mindful manager. If you don’t let your charges know who is in charge, if there’s no clear division between staff and ownership, if people don’t know their roles, don’t listen to authority, don’t understand that you are the owner of this establishment, the mindful manager, and not some charitable good-time giving groovy son of a gun running a chill place to kick it, they will run roughshod over you, make a monkey out of you, steal from you, rob you blind, eat all the pastries, give out free coffee to their idiot friends, and generally try and destroy you. The only way to meet this offensive is head-on, with a gosh darn clenched fist if need be, and constant monitoring, because that’s the way the world works, that’s capitalism, that’s how it is, I didn’t make the rules, I just know this world will drive you crazy if you let it. I haven’t slept in a week but I have to stay in control of this cafe and so I’m going to call again. I’m calling again.

David—you have to run the bus tub. My new interface, it’s a contact lens and cochlea implant actually with full digital read-out across the user-best 8 panel interface, controlled by voice, and so I could see it when David entered the walk in and I could hear it when the lock went click and I could even see inside the cooler because I did opt for cameras there, I did select the full coverage even though I know that’s an additional $49.95 for install and another $10 per month, but I watched him for hours as the screaming turned into crying, and crying turned into begging, and then he went silent and cold at around 4am, and two hours later Kevin found him with his heart stopped, because I can watch it again and again but I can’t be there all the time to help and of course I still have the file, of course, I keep all of it for reference, it’s about mindful management, I’m a mindful manager, I couldn’t delete it if I wanted to, but I won’t, because being a good manager is hard, it’s something most people will never understand, the burden, the burden, the burden, because sometimes good management is about letting your employees make their own mistakes.

The post The Tale Of The Mindful Manager appeared first on Sprudge.