The Tale Of The Ghoulish Morning Shift 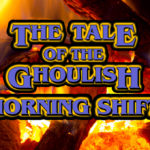 I don’t believe in ghosts or paranormal activity, but 30 years ago I had a series of experiences I can’t explain in any rational way. It spooked me enough that I’ll never take another job that requires me to work before dawn. I also still refuse to answer knocks at my door.

Bulldog News, owned by Doug Campbell and Gloria Seborg, is a newsstand and cafe in Seattle that’s been serving news junkies and the caffeine-deprived for the past 34 years. In the mid-1980s I worked there as a barista and, eventually, a manager. It was the perfect job for a news and magazine junkie like me. It did, however, require getting up at an obscenely early hour.

Bulldog ran the distribution of The New York Times for the University of Washington campus, which meant I had to arrive by 4:30 AM to make sure our undergrad carriers got their newspapers. After the carriers were on their merry way, I would tune the store radio to NPR’s “Morning Edition,” prime the espresso machine, and hang out until it was time to open at 6:30. Bulldog’s front doors face the normally bustling University Avenue, but at that time of morning “The Ave” was so quiet I’d only hear the occasional “swoosh” of a passing city street sweeper or the slow, erratic shuffle of an inebriated student heading back to the dorms. It was also dark and almost always raining, which I thought early on in my Bulldog tenure was the only half-way spooky aspect of the job.

Then I heard the knock.

It was 5:00 AM on a Thursday morning and I was sitting in the front of the shop, sipping on my first shots of Bulldog Blend espresso. My usual morning routine was suddenly interrupted by two solid knocks at the back door. I walked to the back room to see if it was a delivery, but when I peered through the glass pane, I couldn’t see a soul. I cautiously opened the door and looked up and down the alley. Then I heard a man’s voice say, “Ready?”

The only living thing I could see in the alley was a seagull eating trash down by Magus Books. I couldn’t lock the back door fast enough.

Two weeks later it happened again, on a Thursday at about 5:00 AM. I went to the back door and saw nothing. This time I decided not to go outside. But when it happened a third time, I started getting nervous. That early in the morning I was all by myself inside Bulldog and it was always pitch black outside. Was someone playing a practical joke on me? Was there a water pipe that only made knocking noises on Thursdays at 5:00 AM? One afternoon, during a clove cigarette break in the back alley, I shared my story with a friend who worked as a barista at Cafe Allegro, the espresso joint located just a few feet down the alley from Bulldog’s back door. He just nodded his head and rather matter-of-factly stated, “That was probably just Cassidy.”

I waited for the punch line and when it didn’t come, I realized he wasn’t joking. Cafe Allegro, opened by former Starbucks executive Dave Olsen in 1975, was one of the very first espresso bars in Seattle and the staff is well-versed in its history. According to my friend, our end of the building, which was built back in 1909, used to house the Forkner Funeral Home. I pumped him for more information and learned that Cafe Allegro’s front entrance (and our back door) all used to be part of the mortuary’s garage. In 1944 one of their hearse drivers took a wrong turn at night and ended up crashing into the Lake Washington Ship Canal. It was years before they recovered his body. “That was Cassidy,” my friend told me. “Every once in a while he likes to knock on doors like he always did, looking to see if his ‘customers’ were ready for a drive.” Then he laughed and said, “I think Thursdays were his pick-up day.”

After a few more nervous mornings, my level-headed Ph.D. candidate girlfriend convinced me it was probably the Allegro crew playing a practical joke. Given our constant good-natured trash talking about which of us made the best espresso on “The Ave,” it sounded plausible to me. So I decided to catch them in the act.

It was a cold October Thursday morning, and I’d asked one of our other managers to cover the first part of my shift. I told her one of our carriers was sick and I had to make their New York Times deliveries. As Tanya hung out inside Bulldog, I stationed myself at end of our back alley. I got suspicious looks from the occasional passerby, but nobody entered the alley or went near our back door. After about a half-hour I was cold and bored so, feeling a tad stupid, I went back to Bulldog and asked Tanya to let me in the front door. What happened next still gives me goosebumps when I think about it.

“Did you forget your keys?” Tanya asked. When I told her I had not, she said: “That wasn’t you knocking at the back door?” My face turned a shade of white usually found only on polar bears and marshmallows. She suggested I may need to eat more red meat. I just mumbled an agreement.

Astonishingly I stayed at Bulldog for another 10 months after, but every Thursday morning, as the clock approached 5:00, I would crank up NPR and pretend not to hear what I know I heard. I hope ol’ Cassidy didn’t feel slighted. And if he did, he’s going to have to ring a doorbell to find me.

Michael Alberty is a wine writer based in Oregon, and a Sprudge Wine contributor.

The post The Tale Of The Ghoulish Morning Shift appeared first on Sprudge.