The Tale Of The Dead Man’s Latte 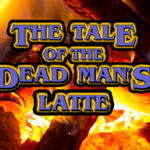 Getting a cup of coffee is not the honest ritual it used to be, sacred as a clean bra, or saying grace before a meal, or reading a magazine cover to cover. Such activities ground a person, more effectively even than religion. These days, coffee is decorated. It is too distracting to fulfil a person’s real need for a hot bitter sip, the caffeine shiver, the get up and mojo required to face every goddamn new day. Now getting a cup of coffee is an event, demanding the creation of a mood, demanding several decisions, demanding appreciation of the fern leaves and hearts, swans and dragons, snails and apples that unnecessarily appear in coffee cups, which themselves are much smaller than they used to be.

It makes me tired. And what is wrong with the world in which my son, graduated with a Master’s degree, can only find work making coffee? Not even making sandwiches and coffee. He stands in one place all day every day, behind a coffee machine that looks like a Camaro, and pours pictures in people’s lattes, which those people then cover with landfilling plastic lids and slurp while texting and driving.

And what is wrong with the world in which my son is dead? The unbelievable shit frequency with which I forget. Yesterday I walked into the fancy cafe where he used to work. I say “fancy” with a box of iodized salt; I wouldn’t blame anyone for mistaking it for an industrial design studio with chandeliers in bad imitation of the decor at Versailles. I walked in for the first time since it happened, likely sporting a sour look on my face. I never have been able to pretend to like a stupid person or a stupid thing. What could be more idiotic than the establishment in which my son earned minimum wage for the last two years of his life? He always reminded me that it was minimum wage plus tips. Oh honey, hold the door. The place still made me sick. But he did all he could to calm me down about it, try to make me enjoy myself when I came to visit.

He invented a coffee design for me called the Jackson Pollock. Maybe I’m a hypocrite, but I got a kick out of it. I mean, the fact is that Blake could make one of those fern leaves in three seconds, and he made a point of taking about two minutes on my latte, allowing the brown foam to set a bit, then laboriously drizzling trails of white foam across the surface. Usually he ended with a big blob, slightly off-centre, whatever was left in the pitcher. Once he almost got fired for the appearance of my coffee, until I told the manager to calm his soul, I had studied art history in college, I was just fine with an abstract design. I’ll never forget the look on Blake’s face. His scalp pulled back so his shaggy bangs rose above his eyebrows, his wide were wide. He was mortified. I was damn proud of him. That was less than a year ago.

The worst part of Blake’s accident has been feeling that I have lost my partner in crime, my son, for whom I wanted the world and who apparently cannot even experience my indignation any more. The impact of the other car broke his collarbone, and they put a foam brace on him, even though he was probably already gone when the bones shattered, so that his corpse wouldn’t be deformed. Not that they told me any of this beforehand. I went in to see him and thought they must have made a mistake; he was just injured. In fact, he’d broken his collarbone in fifth grade; it was probably the same place. I was so relieved. I thought, Why in hell would they bother with a brace, if he was dead? He looked just like he had the first time around. The funny solemn way he would sleep with a little smile on his face and his hands folded over his stomach like an old man. The attendant at the morgue got flustered, and even as I felt like someone had punched me in the stomach, I was embarrassed. Christ. Blake, not my husband Bill, was the one who, I always comforted myself, would understand what I meant.

I walked in to the cafe, the only woman in the place not wearing ankle boots (more like sprained ankle boots, I always say to Bill), and ordered a regular latte from the girl at the till. She was new and I had to make a point of refusing to even consider any modifications, or a five-dollar scone with jam for another dollar. She was very kind to me anyway and had that sexy young girl’s bedhead; Blake would have liked her. I waited even longer than usual for my cup of coffee; I was grim but cheerful about it for twenty minutes, then I started to look for any sign of a legitimate problem. Nothing. The girl at the till was still happily taking orders. Men in dress pants and expensive sneakers were walking out as if they needed to take a pee, trying to balance recycled cardboard trays in one hand, reefing on their electronic car keys in the other, shouldering open the double doors. Blake’s cafe used to be the main branch of a bank, for crying out loud.

I peered around the topknot of the woman in front of me, probably a philosophy professor. The young man standing at the espresso machine was, in fact, moving very slowly because of his collarbone brace, which held his neck stiffly straight, like those snakey woollen scarves Blake and all of his friends were always winding around their necks starting the first of September. He couldn’t look down to see what he was doing, which was why he was taking so long to make every drink. Furthermore, he was sticking his ass out in order to put his eyes at the right level, which was causing a traffic disaster behind the bar. His hair was falling over his face, not improving the situation. I tried to see what he was doing, but the woman with the topknot stood firm.

The next minute, she swooped in to take a compostable cup from the counter, turned around, and almost crashed into me, spilling her coffee. She looked down at her duffel coat and back up at me. What did she expect? I stood in the same place the whole blooming time. Not my fault if she didn’t consider the fact that there was a line of people behind her. I stepped out of the coffee that was spreading all over the floor and looked over to check on the handicapped barista’s progress.

He was standing up straight, half turned towards me and the redhaired woman like he wanted to know what the problem was. He looked about the same height as Blake and he had the same bony wrists and faded ballpoint pen reminders Blake always had scribbled on his hand. I could only read one, something about picking Mom up at four o’clock. He was wearing one of Blake’s t-shirts, the green one I kept throwing out because it had bleach stains. It was in even worse shape than I thought, a big rip, one of the sleeves hanging off. At the back of his neck, his hair puffed over the top of the foam collar, as if it had been growing over it.

I stepped back and bumped into the person standing behind me. The barista reached for the velcro that fastened his brace and turned around.

Above the stray chest hairs poking through above the ratty neckline of the green t-shirt, Blake’s collarbone looked like a shiny red goose egg. A sharp white piece of bone was sticking through the skin and blood was trickling down into the fabric. It was already crusted with blood, the red stains were turning brown. He was trying to stand up straight, but he looked like a marionette doll someone had jerked around too roughly; his chest seemed to be caving in while his shoulder was dropped and thrown back.

He was looking somewhere past me. There were beads of glass stuck in his stubble, in the oval shapes that only surprise a person who’s never seen a shattered windshield, and his face was evenly covered in blood, like someone had painted it, except where it had been washed away by the tears trickling out of his eyes, which they never blinked at all, and snot coming out of his nose. There was glass in his eyelashes that I always teased him should have featured in a mascara ad.

He was looking for someone. I tried to think of something to say that wasn’t stupid, but before I could speak up he made a funny little nod and the shard of bone in the goose egg poked out farther. From somewhere on my left, the philosophy professor reappeared.

Blake pushed a compostable cup toward her and opened his mouth. Pieces of his teeth sprayed out and bounced off the counter. It was like some clumsy person spilled a cupful of dry rice. The redhead professor leaned in toward him, smiling, elbowing me. I just stood there. He didn’t look at his mother once. He gestured, modestly, at the coffee he had made to replace the one she’d spilled and oh god he told her it was an abstract design.

Lizzie Derksen is a Sprudge contributor based in Edmonton, and the co-author of Project Compass, an experimental novel out now from Monto Books. Read more Lizzie Derksen on Sprudge.

The post The Tale Of The Dead Man’s Latte appeared first on Sprudge.