The Tale Of The Dark Roast 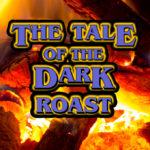 “You can’t smoke in here,” I said, before he’d taken more than three steps into the shop. He looked around as if I might be speaking to someone else and caught my eye to make sure I was serious. Unexpectedly and inexplicably, he pulled the cigar from his mouth and put it out on the large, silver buckle on his belt. As he walked toward me he dropped the extinguished stogie into his coat pocket, Columbo style.

“This is your coffee lodge?” he asked.

“Coffeehouse, and yes I’m the owner.”

One of those old-school salespeople, I thought, who will walk down the street cold calling every single business.

“You know,” he said, “this house is called Three Cedars.”

“I do know that because that is the name I gave it when I started the business.”

“And you make coffee here?”

“We roast coffee and brew coffee. Can I help you with something?”

He looked at the floor as if searching for an answer to my question. He was wearing the most wrinkled khaki suit I’ve ever seen, an equally wrinkled blue shirt, and a thin burgundy bow tie nearly the same color as his penny loafers and the band around his center dent straw hat.

“Why did you name it Three Cedars?” he asked.

I never got tired of this question. “Because we’re located at the corner of Cedar and Third.”

People usually made some sort of “ahhhhaaa” sound when they heard this, because I’m so goddamn clever, but he only nodded and asked another question.

“What do you mean, you roast coffee?”

I pointed to my shop roaster in the back corner.

He nodded again. “There’s fire inside that machine?”

“When I’m roasting coffee there is. Can I get you a cup of coffee or something?”

“How much is a small coffee, black?”

His head snapped up and he gave me that look of disbelief you sometimes get from older people who remember paying a dime for a cup of coffee. But he didn’t look too much older than me, early fifties maybe. He pulled some change from his pocket and started counting coins. I poured out a small cup and told him it was on the house.

He winced. “No, I have to give you something to remain here, but I’m without a billfold.” He dropped the coins on the counter and took his coffee.

“That’ll be fine,” I said. “Halloween is always a slow night so the coffee would go to waste anyway.” I swept the coins off the counter. They felt odd in my hand, or sounded wrong, and I noticed they were all dated from the 1950’s. I looked up to tell him I didn’t want to take his coin collection but he had moved to the back of the shop and was standing in front of the roaster. The half dozen customers who had been in the shop when he entered were all gone.

“Who are you?” I asked, as I joined him near the roaster. He’d already finished his coffee.

“I am Nathaniel. Did you know, there were once three lone cedar trees standing on this very spot, like points of a triangle, and no other trees as far as one could see in every direction?”

“That’s quite a coincidence. How do you know that?”

“I would say that’s interesting if it didn’t somehow sound like bad news.”

Nathanial raised an eyebrow. I noticed he had removed his belt and wrapped it around his hand so the large silver buckle looked like a shield covering his fist.

The ice cube on the back of my neck was now a cold wrap covering my entire head and the unintelligible voices had escaped the kitchen and become angry whispers darting around the ceiling.

“I’ll need to be lighting my cigar now.”

He lit his cigar and within minutes smoke filled the entire coffeehouse like the thickest fog. “You need to light the fire,” he said.

I fired up the roaster. “It will be a while before we can roast coffee.”

“Not coffee. It will be hot enough by midnight.”

I thought midnight was still hours from now but when I looked at the clock it was just a few minutes away. Nathaniel inspected the roaster, stopping to hold both hands over different parts. He opened the dump chute door.

“Close it when I tell you to close it,” he said.

“What is this, what’s happening?”

“Every sixty years, due to an error in my original sounding, this witch tries to bring back his kin, brothers and sisters, demon witches all, by returning to the place of their making, the three cedars on the plain.”

He pulled the cigar from his mouth and examined the end, soggy and chewed.

“Skinning a human alive, for starters. Actually, it’s more of a peeling, like a banana. There’s a whole recipe.”

“I’m guessing you’re not the human in this equation,” I said.

“I haven’t been human for a very long time.”

The sound of a shovel being slowly dragged across pavement came from the front door of the coffeehouse behind me and my entire body grew ice cold. I was shivering. The whispers became a wet sucking sound and I turned to see a cruel and broken face forming inside the dense cigar fog.

It lingered a moment, swaying hypnotically, then suddenly rushed toward us.

Somebody, probably me, let out an ear-piercing shriek. Nathaniel stepped in front of me with his giant belt buckled fist. “I see you once more Shade,” he growled. “I see you again and I have you.” The empty eyes of the smoke face widened. He was caught. The belt seemed to absorb him, like the mirror taking Alice.

Nathaniel turned quickly and threw it into the roaster while still holding the end of the belt, then snapped the buckle back. All of the cigar smoke in the room followed. “Close it, close it now,” he yelled. I dropped the chute door.

We both stared at the roaster for a long time, listening to what sounded like a drive belt slipping. I was breathing heavily. Nathanial wasn’t breathing at all. “I smell lavender,” I said.

After a few minutes, the screams from inside the roaster subsided and Nathaniel said it was finished. I pulled the tryer and it was filled with something like black sand.

“There’s more inside,” he said. “Sprinkle it on your vegetable garden and you’ll get tomatoes the size of dragon balls.”

“I’m not sure I understand what just happened.”

“You don’t, but it doesn’t matter. The three cedars, old and new, are clear…for all practical purposes.”

Nathanial told me he needed some money, the equivalent of ninety cents in 1957, around eight dollars. He also needed my clothes, even the shoes. He said nothing he’d brought with him could go with him now. He traded the belt and buckle for a tamper. So it is that I own a khaki suit I can’t wear but won’t throw away, a belt buckle that looks like a rodeo prize, and a collection of coins from the 1950‘s.

Every Halloween, we close the coffeehouse just before sunset, before the roaster starts to moan.

Mike Ferguson is an author and coffee professional based in Atlanta, Georgia. Read more Mike Ferguson on Sprudge.

The post The Tale Of The Dark Roast appeared first on Sprudge.