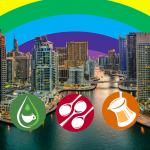 A complete press release, including more information about event hosts and sponsorship opportunities, is available here via World Coffee Events.

What you will not see in that World Coffee Events press release is any mention of why Dubai, and the federal monarchy to which it belongs, the United Arab Emirates, might be a controversial choice to host an international specialty coffee event. Let’s explore two controversial issues: slave labor and human rights abuses against LGBTIQ citizens and foreigners in the Emirati states.

First, slavery. The kafala sponsorship system, which operates in all Gulf Cooperation States, has come increasingly under scrutiny as preparations are made for the 2022 FIFA World Cup in Qatar. News organizations including the BBC, The Guardian, Deadspin and the New York Times have extensively profiled the extent to which slave labor is used in major construction projects in the Gulf States, and organizations like Human Rights Watch and Amnesty International have condemned the kafala system as modern-day slavery. Kafala practices are very much alive and well in today’s Dubai, and are just the tip of the iceberg for the country’s troubling human rights record—what the New York Times earlier this year called “systemic human rights abuses” in Dubai.

Second, it’s essentially against the law to be gay in the United Arab Emirates. Transgender identity and homosexuality are crimes here. Consensual gay sex can result in jail time of months or even years, and sodomy is technically punishable by death in the UAE, though some claim the death penalty law has never been enforced in Dubai.

As per one refugee aid association, “All sexual activity outside of heterosexual marriage is illegal in the United Arab Emirates (UAE) and carries a penalty of ‘confinement for a minimum period of one year.'” There are numerous real world examples of foreigners being charged with jail time for being gay in Dubai.

In 2016 a British gay couple were “detained in the Dubai airport while staff laughed about their sexuality.” In 2009 a visiting lesbian couple were arrested and sentenced to prison time for kissing on a Dubai beach, and the Dubai police force has organized a special task force to monitor and prevent “homosexual and indecent activity” on public beaches in Dubai. There are reports of gay tourists being targeted for blackmail and extortion in Dubai, and when one recent robbery was reported, Dubai responded by opening a special investigation against the victim because he met his attackers on a gay website.

There are dozens more examples. All of this is publicly available information. In 2013, no less of an authority than the Obama-era US State Department issued a lengthy warning on “arbitrary arrests, incommunicado detentions, and lengthy pretrial detentions” for foreigners in the UAE. Elsewhere in that State Department report we learn that “the country’s two internet service providers used a proxy server to block materials deemed inconsistent with the country’s values”—including LGBTIQ websites and advocacy groups; the report also includes vague and enormously alarming mention that “the government took action against cross-dressing individuals, and transsexuals.”

A chilling example of that occurred just one month ago, when two Singaporean nationals were arrested in a Dubai shopping mall for “looking feminine.” Dubai authorities have even been accused of specifically targeting gay travelers with unrelated nuisance charges, detaining one Canadian couple for daring to travel while gay with arthritis medication.

We’re obviously concerned, and so we reached out to World Coffee Events for comment in advance of this morning’s news release. They referred us to the Specialty Coffee Association, whose Director of Communications, Vincente Partida, replied with the following comment from SCA on hosting their 2018 events in Dubai.

Many factors were considered when selecting Dubai as one of tree locations for the 2018 World Coffee Championships, including the stellar reputation and reach of our host partners, Gulfood, GulfHost, and Dubai International Hospitality Week.

We certainly understand and share the concerns around the UAE’s anti-homosexuality laws and human rights record. To be clear, the SCA strongly condemns the persecution of members of the GLBTQ+ community and any use of slave labor.

As an international organization, one of our main objectives is to serve coffee communities in every corner of the world while considering the safety of our members.

There is a thriving specialty coffee community in Dubai and the surrounding region— exceptional people who love coffee and have dedicated their professional careers to this industry— and they are ready to welcome the international coffee community with open arms. As with all SCA events, we will work with our host partners to provide our competitors, volunteers, judges, and guests with the best possible experience at the show with maximum consideration for their safety.

The SCA “strongly condemns the persecution of members of the GLBTQ+ community and any use of slave labor,” up to the point of awarding multiple international events to their “stellar” event partners in Dubai, where slave labor is the norm and homophobia is the law. At which point the condemnation turns out to be, you know, not that strong.

The SCA promises to “work with our host partners to provide our competitors, volunteers, judges, and guests with the best possible experience at the show with maximum consideration for their safety,” unless you happen to be gay and bringing prescription medication into the country. Or get caught kissing on the beach. Or get held hostage and robbed by someone you met on Grindr. At which point the SCA and its event partners can’t do a lot to protect you.

The SCA’s code of conduct for events clearly states [emphasis ours]:

Sadly this zero tolerance policy for harassment does not extend to the Dubai authorities, who can and will harass, detain, and imprison visitors for the crime of being gay.

The SCA’s decision to award these events to Dubai violates its own code of conduct. Gay coffee professionals will have to measure the risk of detainment, harassment, and possible prison time in order to attend and participate in the SCA’s 2018 events in Dubai. If you’re reading this, you should be concerned. As a gay-owned publication and long-serving media partner of World Coffee Events and the Specialty Coffee Association, we are very fucking concerned.

Specialty Coffee Association members were not consulted prior to awarding a portion of the 2018 World Coffee Championships portfolio to Dubai-based festivals. But what happens next is very much up to the membership.

This story is developing…

Know more about the decision to award 2018 SCA/WCE events to Dubai? Get in touch.