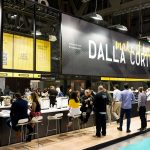 Last weekend, more than two thousands global manufacturers gathered in Milan to showcase their products at HOST Milano, one of the biggest hospitality conferences in Europe. This is where the world’s cutting-edge coffee technology companies come to debut their latest products, and with hundreds of coffee brands spread over four pavilions in an area of roughly 60,000 sqm, there was certainly no shortage of new gear to discover at HOST Milano 2017.

Our London-based writer Giulia Mulè was in Milan to report back on the most innovative and exciting coffee products which got baristas talking and which are expected to hit the market next year. This is part one of her reporting—we’ll have even more content on product launches and public debuts from brands like Nuova Simonelli and La Marzocco in the coming days. My journey at Host Milano 2017 began at Dalla Corte, one of Italy’s leading brands of espresso machines, whose factory is situated not far from Milan’s exhibition centre. Dalla Corte has invested heavily in research, innovation, and technology over the last few years, with a focus on the speciality coffee market. The results are two exciting products: MINA Smart Bar and DC PRO.

At the heart of Dalla Corte DC Pro espresso machine is a multi-boiler technology (two separate boilers for espresso and water), which allows control over water temperature as well as consistency and quality of extraction. Higher control equals lower energy consumption: the DC PRO is far more cost effective than traditional espresso machines.

The new DC PRO XT, previewed at Host Milano 2017, takes the machine one step further adding an extreme temperature control system. In addition to the temperature sensor of the existing DC PRO, we now have an element that looks at the amount of water that is dispersed during extraction, and measures the amount of power needed to control it. The expectation from Dalla Corte is to have a water control system that is two to three times more accurate than any other on the market.

The DC Pro XT will be available in March-April 2018. Back in 2015, Sprudge reported on an innovative grinder prototype by Sanremo called Revolution. Fast-forward to today, REVO1 and REVO3 are finally unveiled at HOST Milano with a completely new design and improved technology.

John Gordon—a multi-year UK Barista Champion and products specialist—first developed the idea of a grinder with electronic weighing and multiple hoppers five to six years ago. He brought the idea to Sanremo and started working on this project, alongside the Opera espresso machine, whose 2013 HOST launch was covered right here on Sprudge. “We couldn’t look at traditional grinders as inspiration, so it was like starting from scratch”, Gordon tells me. It’s been a long process, but the new grinders are finally here and they were such a hit at HOST Milano 2017 that the company had to keep them hidden away in a room within their exhibition stand.

The word of mouth among baristas and coffee professionals at HOST Milano 2017 is that the new Sanremo REVO3 grinder is a game changer. Winning the buzz war at HOST is no small feat, but this was one of the show’s most talked about new products. Get ready for its release in Spring 2018. The Faema coffee machine factory opened in Milan in 1945. The historic brand—part of Cimbali Group—entered the US speciality coffee market for the first time this year with FAEMA E71, presented at the Global Specialty Coffee Expo in Seattle in April.

FAEMA E71 is a top-of-the-range professional espresso machine blending cutting-edge technology with traditional features and an iconic Italian design. Its main features are Faema’s divalent thermal control system, a touch screen mode and a manual mode for optimal use. Following the E71 success in the speciality coffee market, Cimbali Group decided to gather feedback from baristas and distributors and develop an improved model at a lower price point: the FAEMA E71 Essence.

Presented at HOST Milano 2017, the E71 Essence machine features a new user interface, though the technology is the same of the E71. There are longer steam wands, which work faster and also allow the barista to stand by the edge of the machine, leaving space behind the grouper so that two baristas can comfortably work side-by-side. The front panel—available in either steel or wood—has also been simplified compared to the E71 version.

The E71 Essence espresso machine will be released for the European market in June 2018 and for the US market in November 2018. Barcelona-based coffee grinding company Compak was at HOST Milano 2017, sharing a stand with Alpha Dominche and Slayer Espresso. Their beautiful line of PK grinders (available in white, black, grey and pastel blue colours) caught my attention and so I decided to stop by for a chat with Compak America Managing Director Josh Fields, to find out more about the range.

The new PK line features three models with built-in grind-by-weight technology. The PKF and PKE models have 83-millimeter burrs and 800-watt motors, while the PKR has 100-millimeter burrs and a 935-watt motor. With larger flat burrs than Compak’s on-demand grinders, the PK machines are ideal for high production and high extraction yield.

The PKR in particular is designed to be a uni-grinder: the bigger grind adjustment (compared to PKE and PKF) allows the barista to go from a fine grind for espresso to a coarse grind for drip, with very little retention of coffee in the machine.

The PK line will be available in January 2018. First-time visitors to HOST Milano, like me, can easily be over-whelmed by the sheer amount of exhibitors. All the usual suspects, ie. the world’s leading coffee manufacturers, showcase their most exciting product releases at HOST every other year. I was keen to find new names of companies launching innovative products and I was pointed in the direction of CEADO, a Venetian coffee grinding company.

The E37Z HERO is the latest generation of Ceado products, a single-dosing grinder operated via a separate control box. This machine allows high precision and zero retention.

The grains are pre-weighed, then lightly hydrated with a water spray (this is essential to break the static electricity) before going into the hopper. High precision means that one whole bean of coffee going in equals exactly to one ground bean of coffee out. There is no contamination with other coffees previously used in the machine, which is very appealing to baristas working with expensive single origin beans.

The E37Z HERO is available in two version: one for espresso with a micro-adjustment ring and one ranging from espresso to French Press with a larger ring. There are two main controls in the machine: speed regulation and a cooling fan (which can be activated or not depending on work volumes).

Ceado E37Z HERO will be released on the market in early 2018. Vision by Iberital was presented at HOST Milano 2017 as the pioneer of the next coffee machines generation. It’s an energy-efficient and easy-to-use espresso machine that will be released on the market next year.

Spanish company Iberital responded to a call for projects launched by European Union’s Horizon 2020 research and innovation program. Iberital won the funding (one of thirty winners among 3,000 entries) to develop a high-tech coffee machine with three requirements: to focus on sustainability, water treatment, and connectivity. VISION combines all three elements with a distinctive design.

Behind a simple yet striking surface, there is a sophisticated technology with a multi-boiler system, which allows baristas to program different brewing profiles for each group. Vision can be controlled remotely via the Vision tablet app. Baristas can adjust the machine pre-sets and also share their recipes with other machines.

Vision was presented at HOST as “the healthiest machine” as several features have been added to the machine to make a cleaner coffee. The boilers are nickel and lead-free; the coffee, water and steam pipes are independent from each other so there is no contamination; every delivery is made from fresh water, so that the extracted coffee won’t contain metals and residual salts.

This is part one of Giulia Mule’s HOST coverage—we’ll have even more content on product launches and public debuts from brands like Nuova Simonelli and La Marzocco in the coming days.

The post The Hottest New Tech From HOST Milan 2017 appeared first on Sprudge.