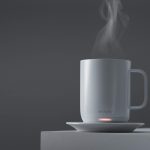 Mugs are great. They hold coffee and make it easy for the coffee to make it to my face. But if I’ve said it once, I’ve said it a thousand times: why can’t coffee mugs be overly complicated? A new mug called the Ember looks to solve the over-underly-complicated nature of cups and the problem of cold coffee at the same time… with the addition of a heating system.

According to Popular Science, the Ember is a ceramic mug with a stainless steel core and a “microprocessor-controlled heating system [that] gathers information from four separate temperature sensors.” When the liquid in the cup goes below the desired temperature—set using a smartphone app that connects to the mug, because everything connects to a smartphone now—the Ember “activates its adaptive dual heating mechanism” to keep and hold the liquid at that temp.

It also has an LED light to tell you when your coffee is at the ideal drinking temperature and also when your coffee cup is running out of batteries, something I never thought I’d say. The Ember is also able to detect when there is no liquid in the cup and will put itself to sleep (to save the one hour battery life) and even has “a three-axis accelerometer to recognize movement and wake the mug back up.”

Call me old fashioned, but I actually enjoy the way a cup of coffee changes as it cools. Part of the dynamism of great coffee is how the flavors evolve as the temperature shifts. And sure, maybe people don’t like drinking cold coffee, but if you can’t get through 10 ounces—the size of the Ember—before your beverage is room temperature, then you most likely forgot about your cup and let’s face it, that one hour battery life isn’t probably going to be long enough to save your forgotten friend.

But what do I know? Time gave it a Best Inventions of 2017 award. And I used to think cell phones were stupid, “because why would I want people to get of a hold of me no matter where I was?” Now I can’t live without it. Maybe I just don’t understand how much I need the Ember because I don’t have one yet.

The Ember retails for $80, and if you buy me one for Christmas I’ll use it. I’m willing to be wrong. But for now, I’m going to keep my coffee warm in my Zojirushi thermos; those things are actually magic.

The post The Ember Is The Mug You Didn’t Know You Needed (But Also Maybe Don’t) appeared first on Sprudge.