The Effect Of Climate Change On Coffee And Bees May Compound 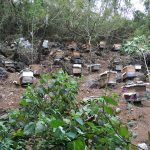 Not to get all Nicholas Cage in Wicker Man here, BEEEEEEEESSSS!!! We need our bees. Big fluffy bumbly ones, the less fluffy honey ones, the ones that are actually just a bear in a bee costume. We need them all. They pollinate our plants—like, say, our coffee trees—and help make sure we can survive on this little rock floating through space.

And like with the coffee trees themselves, climate change is endangering the bees. That may not be particularly revelatory information, but a new study in the Proceedings of the National Academy of Sciences states that climate change will affect these two things—coffee trees and bees—differently and that it may have a compound effect on coffee production.

Bees play a pretty significant role in coffee production. Taylor Ricketts, the director of the University of Vermont’s Gund Institute for Environment, tells NPR that bees are responsible for 20-25% of coffee produced by increasing the total yield via pollination. And though Arabica coffee is capable of self-pollinating, Ricketts points out that bees even “increase the quality of the beans by making their size more uniform.”

But climate change isn’t going to affect bees and coffee trees uniformly. That is to say, as temperatures rise, arable coffee lands are going to shift—possibly moving out of the Coffee Belt entirely—and this study suggests that global warming “could reduce the amount of ground usable to grow coffee in Latin America by up to 88 percent.” But the bees may not be shifting in the same way. “For example, a bee that is at the very edge of its heat tolerance won’t follow coffee into warmer areas.”

Using computer modeling, researchers predict that most coffee growing areas will experience a decrease in the number of bee species, though they do note that around 16% will see an increase.

Or to put it more succinctly, Ricketts states, “We’re going to lose a lot and not gain too much.”

The post The Effect Of Climate Change On Coffee And Bees May Compound appeared first on Sprudge.