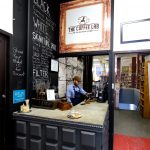 The frontrunner for smallest cafe in the world is in Nottingham, UK. It’s stuffed inside an iconic red British phone box and is appropriately named DiallingIn. In North America, the smallest cafe is La Distributrice. It’s tucked beneath a staircase and has a service window which opens onto the sidewalk in Montreal, Quebec. Which brings us to Toronto’s smallest cafe—though larger than both of the former, The Coffee Lab has a tiny footprint of only 52 square feet and finds itself wedged between a used bookstore and a vape shop in Toronto’s Annex neighborhood.

Despite its meager dimensions, The Coffee Lab is outfitted with a three-group La Marzocco FB 70, two Mazzer Majors, and a Mazzer Mini. Owner and sole barista Joshua Campos also brews filter coffee by the cup on a French press, Chemex, and Bee House brewer using a custom crocodile-skin-wrapped kettle from Australia. Campos is an alumni of the American Barista and Coffee School. After his training in Portland, Oregon, he learned roasting at Classic Gourmet Coffee’s Rufino Espresso and did further training at the late Sense Appeal. Before opening The Coffee Lab in the heart of Toronto in November of 2015, Campos operated a pop-up coffee stand at a farmers market in Rexdale.

The Coffee Lab is a multi-roaster cafe but their primary roasting partner is Glitch Coffee out of Japan. “We were the first to carry [Glitch] coffee in North America and believe we are still the only ones to carry their coffee,” said Campos, recalling how on his first order, Glitch sent two people to personally deliver the coffee to his shop. The Coffee Lab is also known to retail and serve coffees from North American roasters such as Parlor Coffee, Devoción, Hale Coffee, and Anchored Coffee, to name a few. Campos keeps test tubes full of the daily bean offerings on bar for customers to smell before making a decision on what to order. The Coffee Lab’s signature drink, called The Drop, is a condensed shot of espresso over cold milk. Campos learned the unusual tamping and shot pulling technique he uses to make The Drop from the folks at Glitch Coffee. In keeping with a lab theme, it is served in a small frosted beaker. The Coffee Lab’s off-menu beverages include Cup of Excellence coffees roasted by Glitch, which are priced anywhere from $12 to a whopping $45 per cup. The Coffee Lab may be modest in size, but Campos has created an inversely massive following on Instagram—more than 15,000 fans—by posting daily inspirational quotes. “I wake up after I have my coffee—that’s when I start my day,” says Campos. “Having a quote with coffee is a motivation. [It’s] also a motivation for myself to run the shop.”

The cafe attracts many students and faculty from the neighboring University of Toronto. Although The Coffee Lab’s space is standing room only, customers are welcome to peruse the adjoining used bookstore as they sip on their beverages or sit outside on the stoop if the weather permits. 20