The Coffee Collective: Back To The Beginning And Looking Forward 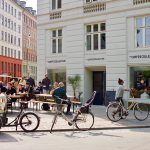 As you walk down the picturesque stretch of Jægersborggade, a narrow residential street connecting Assistens Cemetery and Nørrebro Park on the northern side of Copenhagen, it’s hard to imagine it as anything other than the lively shopping street that it’s become. But this once graffiti-covered stretch of storefronts has transformed during the last decade into the beating heart of some of the city’s most well-known culinary success stories. There’s the Michelin-starred Ralæ and its little sibling Manfreds, the delectable Meyer’s Bakery, and the entrepreneurial success story of Grød, a gourmet porridge shop.

In all, there are nearly 40 independent shops on these 350 meters that include art galleries, boutiques, chocolatiers, nitrogen ice cream, and The Coffee Collective, which opened its first coffee shop on this street in February 2008, before all their current neighbors except for one. While Jægersborggade is not quite as iconic (or touristy) as the old houses along Nyhavn, this street has come to symbolize another side of Copenhagen, one where you can experience the passion that locals have for food, design, and the handmade—far removed from the cheap beers and souvenir shops in the city center.

I met with Klaus Thomsen, one of the collective’s (it really is one) four co-founders, at the newest Coffee Collective location on Jægersborggade—just up the street from where it all got started—to talk about the team’s newest cafes, their many culinary collaborations, and what’s next for the company as they approach their ten-year anniversary. As we chatted in the morning glow of early summer light, a stream of regulars took turns ambling down the steps into the just-below-ground coffee shop and greeting the barista like an old friend. Although the doors had only been open for four days, this new shop was, after all, just a couple hundred meters away from the one it replaced. For many of the regulars, the transition was of little consequence. Only now there were higher ceilings, more light, more seating, and an air of confidence that comes with a new coat of paint and ten years of leading the specialty coffee movement in Denmark. Thomsen and I shared an AeroPress of The Coffee Collective’s signature single origin, Kieni from Kenya, in custom cups made by the Polish ceramic artist, Magdalena Kałużna. The warm bluesy vocals of Valerie June floated above our heads from a set of Bang & Olufsen speakers as Thomsen went around the room pointing out his favorite details like a proud new father.

If you ever had the opportunity to visit the original Coffee Collective on Jægersborggade, you remember one of its key features was that it lacked a front bar. When you lowered yourself down the steps and through the front door, it felt like you’d just walked into a friend’s kitchen—intimate and homey, and something Thomsen really wanted to continue. “We’ve always loved this open bar concept where you enter right into the kitchen. It’s something we’ve learned in terms of customer engagement and how you address a person, you don’t hide behind a counter with your backs to the customer,” Thomsen said. “We purposely made the front bar as small as we possibly could, while still fitting a 3-group espresso machine on it. But we wanted to make it as small as possible and as low as possible so it didn’t feel like a big block in front of everything else.”

And though the spacious shop boasts a cool, but cozy aesthetic—Thomsen wanted it to feel like a chic apartment in the surrounding Nørrebro neighborhood—it’s also kept the original store’s Lego menu board. “I’m glad we kept that,” says Thomsen. “It’s one of my favorite elements from the old shop. Since Lego is Danish, it’s nice to have a few things that are playful so it doesn’t get too serious. I find that you lose a bit of personality when it’s too serious.” The new location sits on a wide corner, a feature that Thomsen confidently exclaims will lead to a successful cafe under most circumstances. Just across the road is a grassy lawn and a busy bike path leading to the Superkilen development, a sprawling design park a few blocks away. Compared to its predecessor, the shop is quite large. It boasts three times the square footage of the first cafe, and can seat 60 people inside, while you’d be lucky squeezing 12 comfortably into the old digs—and several of those would be standing patrons. And when Copenhagen is experiencing its limited but lovely summer weather, the square out front can seat another 60 guests at picnic tables and window benches. It is quite the idyllic spot and Thomsen couldn’t be happier with it. And though it’s not far from the original, the location caught the attention of an entirely new group of passersby who are discovering Coffee Collective for their first time.

In many ways, the new Jægersborggade cafe represents the journey and growth of The Coffee Collective over the years. When the four co-founders—Thomsen, Peter Nørregaard-Dupont, Casper Engel Rasmussen, and Linus Castanho-Törsäter—were still roasting coffee in an industrial space near Kastrup Airport in August of 2007, they began serving coffee publicly for their first time at a farmer’s market on this very street. It was during that time that Thomsen remembers the public’s excitement about what they were doing, the way the coffee tasted, and the general good vibes they got from the area. Early on, they made a connection with the local community that encouraged them to search nearby for their first retail space. But Jægersborggade 10, where the first Coffee Collective shop was eventually opened, wasn’t the storefront the founders originally fell in love with. Indeed, it was no. 57, the large vacant corner space at the end of the street that they had their eyes on. But Thomsen knew that it was beyond the financial reach of a small startup coffee company, at least at the time. And the space needed a lot of work.

“We looked in the windows and everything was trashed,” said Thomsen of the first time he and his partners walked past 57 Jægersborggade. “And it’s basically been trashed for the last nine and a half years. It’s been parking for bikes and a storage room for carpenters. But it’s gone completely unused all this time. The reason was that it required a completely new build-out. It was such a big undertaking that the co-op who owns the building was never up to doing it until now.”

When it finally came to constructing The Coffee Collective’s largest coffee shop yet, in their dream location, most of the budget was swallowed up by necessary infrastructure improvements. “It’s almost tragic, but the biggest expense of this buildout is what you don’t see,” says Thomsen. “We had to construct a completely new deck between the floors, we had to do new sewage, we had to get this gigantic ventilation system, and electricity and plumbing. Those account for much more than the actual build-out of the coffee shop. Which is ridiculous because they are things the customer will never see.” What the customer will see, however, is a soft and reserved Scandinavian aesthetic. The build-out is detail-oriented with an emphasis on custom shelving, well-crafted furniture, and warm colors that give the space its necessary hygge (cozy) vibes thanks to their design collaborators. “We’ve been working really closely with this carpenter duo called Rømer/Harbo who were instrumental in getting the ideas we had into physical design. Suggesting which materials to use and the design of the kitchen cabinets and little details like the brass inside the handles, the simplicity of the tables and the colors.” Thomsen says they really wanted to create the feeling of different rooms, like IKEA, where you could have large round dining tables for groups, high low tables for different types of people, and “different corners where you can sort of hide out and sit and chat quietly and comfortably without feeling like everyone else is listening to you,” says Thomsen. “Because that’s what this coffee shop is, it’s a neighborhood meeting spot.”

With all the help received from Rømer/Harbo, Thomsen says they didn’t relinquish all creative control of the build-out because their team really enjoys that part. “It’s what drives us, that creative process, we all get so much energy from that. We get such a kick out of that whole design phase because that’s really fun,” he said. “And if we just outsourced all of that, we would lose so much of that feeling that this is what we’re working for, to create something that’s unique, that we’re excited for and that excitement spills over to the guests.”

That uniqueness and focus on quality has served the team well in the last ten years, along with being loyal to the coffee producers they work with, and building their brand with an expanding range of collaborations. In the last year and a half alone, while working alongside other leaders in their respective industries, The Coffee Collective has launched a soft serve ice cream, a coffee cheese, coffee caramels, coffee kombucha, a jazz album, coffee beers, and a coffee liqueur. Over the last ten years, The Coffee Collective has been an innovative stalwart of the specialty coffee industry, giving life to some pretty radical ideas—like sharing their green cost on every retail bag and implementing a reusable take-away cup exchange program. But even if an idea doesn’t always pan out, it doesn’t stop the team from trying new things. With all they have accomplished in the last ten years, they’re not slowing down while they celebrate. The new shop on Jægersborggade has been open just three months, but Thomsen and The Coffee Collective team have been busy working on their fifth coffee shop. The new shop, known as Berkinow after the street where it’s located, opened at the beginning of September in an old bodega attached to a beautiful courtyard in Copenhagen’s downtown shopping district, just across the street from a Nespresso store. The new cafe is in the former location of Denmark’s very first draft beer bar, and in honor of that, The Coffee Collective acquired its alcohol license and a six-tap draft system. This will allow baristas, for the first time, to serve up The Coffee Collective’s beer collaborations, draft cocktails, and their new coffee kombucha. As the company proceeds with its big plans, the company will say goodbye to its first decade and embrace some changes in the process. Along with opening their newest retail stores, the team at The Coffee Collective will say farewell to Linus Törsäter, one of the four co-founders of the company who is leaving to pursue life back in Sweden. But as this chapter of a respectable first ten years comes to an end—the next one is only beginning.

Brian W. Jones is the publisher of Dear Coffee, I Love You, author of Brew: Better Coffee At Home, and the creator of Welcome™, an international branding and design studio based in Stockholm, Sweden. Read more Brian W. Jones on Sprudge.

The post The Coffee Collective: Back To The Beginning And Looking Forward appeared first on Sprudge.