The CDC Releases Report On The Health Risks At Coffee Roasteries 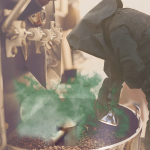 Last year, we reported on the potential dangers of inhaling roast exhaust, specifically as it relates to a higher likelihood of developing lung disease. This was based on research being compiled by the Center for Disease Control and Prevention, and now they have released the full 67-page report, according to USA Today.

As previously noted in our first article on the topic, the main culprit suspected of causing the lung damage is a chemical called diacetyl, a naturally occurring byproduct of coffee roasting. Per the USA Today article, the National Institutes of Safety and Health “recommends workers not be exposed to more than 5 parts per billion of diacetyl as a time-weighted average over an eight-hour work day… calculated to limit the risk so that no more than 1 in 1,000 workers would be expected to have reduced lung function at those exposure levels over a 45-year work life.”

When testing 49 air samples from around Just Coffee Cooperative’s 16,000-square-foot roasting facility in Madison, Wisconsin—the site where all the collection data occurred—the CDC found 10 samples that exceeded the 5 ppb threshold. From the report, “grinding roasted coffee beans, blending roasted coffee beans by hand, and weighing and packaging roasted coffee were associated with higher diacetyl levels, likely due to the close proximity of the employee’s breathing zone to the roasted beans.” Grinding coffee was tagged with the highest diacetyl exposure levels for employees at 37.6 ppb over a 14-minute time period. The report also notes that the inside roasted coffee storage bins had instances of diacetyl at 99.4 ppb but are not reflective of employee exposure.

The results of this exposure on the workers is not insignificant:

Our findings of upper-respiratory symptoms with a work-related pattern in many employees, four-fold excess of wheeze and abnormalities on lung function testing in about a third of participants suggest a burden of respiratory problems in this workforce.

CDC recommendations for means of reducing exposure to diacetyl include vacuuming instead of sweeping, which just kicks dust around; the use of masks/respirators during higher-exposure tasks; adding exhaust fans over grinding and blending stations; and the use of automated blending devices.

This report is just the first step the CDC is taking to better understand exposure at coffee roasteries. According to USA Today, they are currently doing similar research at 18 roasters across the United States, with results expected in the coming months.

The full report can be found here. To read a statement from Just Coffee regarding the findings, visit their official website.

Comments are open. Sound off below.

The post The CDC Releases Report On The Health Risks At Coffee Roasteries appeared first on Sprudge.