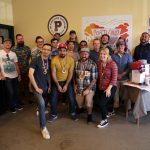 We spoke with event co-organizer (and Sprudge and Coffee Sprudgecast contributor) Elizabeth Chai, who told us, “After spending a few years as a spectator and journalist covering the Brewers Cup Regionals, Qualifiers, and National competition, I really fell in love with Brewers Cup. Portland Coffee Social Club jumped at the chance to host a Preliminary event, especially since we’ve been wanting to encourage more competitors coming out of Portland and the Pacific Northwest.” In the early hours of Saturday, the event officially kicked off with a generous Portland coffee Walking Tour hosted by Jen Hurd of Genuine Origin. Hurd herded a handful who hoofed it to the Water Avenue flagship location, Coava‘s brand new brew bar and roastery, Elevator Cafe & Commons, Upper Left Coffee Roasters, and Good Coffee. “We discussed the long history of Portland coffee, from the mid-1850s up to now and a little speculation on the future,” says Hurd, “and chatted with roasters and baristas along the way. We were warmly greeted by each cafe and enjoyed some delicious coffees and conversation.” Back at the Buckman, the Brewers kicked off. The Buckman Coffee Factory was dressed to the nines in Portland mid-century chic, with a La Marzocco/Modbar lounge decorated with nap-worthy comfort furniture courtesy the curation from local vintage boutique Midnight Sunlight Shop. Attendees snacked on assorted cheeses, fruits, Quin candies and sipped upon La Croix and a selection of beers while perusing printed goods, swag, and coffees. Scout Books printed gorgeous programs featuring every competitor from the weekend. Of the eighteen Brewers Cup competitors, five competed from California, nine from Oregon, and four from Washington. Four advanced, but as Head Judge Nathanael May of Portland Roasting Coffee put it, the other fourteen are “still be just as qualified to enter the Qualifiers as the rest!” It’s just that the top four get secured spots and travel vouchers furnished by event sponsor Pacific Foods.

“This is an extra happy day for four people but not the end of the road for the rest,” said May, as he announced the creme-de-la-creme of the crop.

Here are those rankings (for a larger version, click here):

Competitor Zach Perkins of Roseline Coffee took first place. Perkins, fresh off of winning the US AeroPress Championship, took top place at Brewers Cup competing using—you guessed it—AeroPresses. We asked Perkins how he felt about winning so much and he told us, “This last week has been surreal! The Aeropress win was a huge surprise, I entered as a wildcard because I got knocked out of the regional in the first round. I ended up having to brew my recipe on stage eight times before the final.”

“I had a day to put together a program for Brewers Cup and ended up continuing with using the AeroPress,” Perkins explained, “I was excited about the new Brewers Cup format because it really came down to how successful your recipe is. I had a ton of fun putting together a recipe for the Rwandan coffee I chose and was excited to serve the judges my outcome. I was secretly hoping that I’d at least get 4th just so I could get one of the rad burr medals. When they announced me as the winner, I was floored and couldn’t believe it. I’m still in shock from this last week’s events, and I’m really excited to be joining Roseline starting next week.” Zach Perkins brews with the AeroPress.

Weekend three of the US Barista Champs Preliminary Brewers Cup and Barista Competition continues next, next weekend in Denver, Greenville, and Washington, DC. Follow all of the action right here on Sprudge!

The post The 2018 US Coffee Championships Prelims: Weekend Two appeared first on Sprudge.