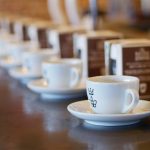 The final weekend of the US Coffee Preliminaries has come to a close and we now know everyone with a guaranteed spot in the Qualifying Events taking place in the coming months. Events in Louisville and Tulsa—The Kentuckia and Green Country Prelims, respectively—rounded out the month-plus of coffee competitions that took place in a total of eight different locations around the country. As as with every other prelim, we had folks on the ground in both locations—seeing the sights, hearing the sounds, drinking the drinks—bringing you so close to the action you’d think you were actually in two places at once. Competitors from all around the south central United States descended up the Topeca Instruments Division, Topeca Coffee Roasters‘ training lab and roasting space to take part in the Barista Championship and/or Brewers Cup. It was a mixed bag of competitors to take the stage in Tulsa, from a handful of first-timers all the way up to a reigning national champion and runner-up and just about everything in between. The weekend’s festivities were emceed by the inimitable Ian Picco—Topeca’s Director of Coffee—channeling the ghosts of late 60’s TV hosts, homemade Bob Barker microphone and all. “Topeca Instruments Division hosts classes for coffee professionals and coffee geeks alike, but it was a whole ‘nother level of honor to be able to host the Green Country Prelims,” Topeca’s Tyler Duncan tells Sprudge. “We love being able to invest in the industry we care so much about! It was such a blast to have so many of our coffee friends and family here with us. We hope everyone had a great time, and are pumped for those whose spots are reserved in the qualifiers.”

The Green Country Preliminaries just so happened to occur at the same time as Topeca’s 15 year anniversary, so of course there was a raging party (what’s a barista competition without a party?). The empty lot next to the Instruments Division made for the perfect location, seamlessly transitioning from Saturday’s last competitor into debauched good time that included beer from Dead Armadillo Brewing, cocktails from Hodges Bend, and a live concert from funk band Count Tutu—whose horn section, and I cannot stress this enough, absolutely shredded. Everyone wanted to see Onyx’s Andrea Allen’s routine. Everyone. In Kentucky, the Quills Coffee firehouse—featured a few months ago as part of our Build-Outs of Summer series—hosted the 27 competitors comprising the seventh and final preliminary of the 2018 US Coffee Championships. Hundreds of spectators stopped by the roasting space throughout the weekend to cheer on local favorites, well-seasoned competitors, and a host of first-timers. “Overall the weekend was a big success. The Quills firehouse was a perfect venue for hosting such a big group, and especially convenient with a separate practice space, competition area, and plenty of room outside and in the cafe to mingle. Cimara Dunn, Brian Beyke, and the rest of the Quills staff were incredibly prepared and ran the competition as smoothly and efficiently as possible—even going as far as to ensure specific grinders followed competitors from the practice area to the competition floor,” states Bryan Schiele, half of the I Brew My Own Coffee podcasting duo and Sprudge’s person on the ground at Kentuckia prelims. “It was especially great to see how many first time competitors showed up for this new format and also to see how well-prepared they were to compete. Between the local support, the many sponsors in attendance, and all the folks who showed up for the throwdown on Friday evening, there were hundreds of people stopping by to get a peak at the action.” The post The 2018 US Coffee Championships Prelims: Weekend Four appeared first on Sprudge.