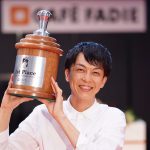 The scene is Tokyo, in late September. That’s where Takayuki Ishitani took his place in the history books, securing first place at the 2017 Japan Barista Championship. It is an achievement twelve years in the making.

Ishitani’s competed using coffee from Hong Kong’s The Cupping Room, and his championship routine featured a unique expression of espresso. The competitor chose to chill each espresso spout before extraction, a method he explained brought balance to his espresso shots by cutting some of the sharpness in his Ethiopia Gesha Village coffee. Ishitani’s signature drink highlighted the grape flavors inherent in this coffee and started with him breaking up the espresso shots into three separate batches: the first ten seconds of extraction, the following five, and the final three. To these, Ishitani added balsamic acid, grape syrup, and grape juice, respectively, to bring out the acidity, sweetness, and volume of the coffee. The three parts were then mixed together, and blended with roasted lemon myrtle ice.

For Ishitani, the day marks the culmination of years of consistent hard work and dedication, which he attributes to the support of his friends and family.

“I feel like today I finally reached the start line,” he said of the win. “I’ll do my best as the next Japan representative.” Second place in the competition went yet again to Keisuke Honma of Saza Coffee, whose presentation of a Ninety Plus Panama Geisha culminated in a signature drink including vanilla water, vinegar, and cranberry juice with a cold brew coffee and apple juice foam to create glasses of “specialty coffee wine.” Fellow Saza Coffee standouts Wataru Iidaka and Yuki Yasu took fifth and sixth respectively, marking Saza Coffee as a name to look out for in future competitions. With his first place victory confirmed, Ishitani will now go on to represent Japan at the 2018 World Barista Championship in Amsterdam, but not before Miki Suzuki represents Japan next month at the 2017 event in Seoul.