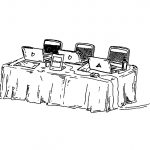 Earlier today the Specialty Coffee Association—the world’s largest coffee trade organization—announced its long-awaited decision on suspending the awarding of coffee tournaments to the UAE in 2018, after international outcry around the Emirates’ well-documented human rights and the LGBTQIA abuses. That decision came in the form of a new “Deferred Candidacy policy,” the full language of which you can read here.

In direct response to this policy, Sprudge Media Network has resigned from our media partnership with the Specialty Coffee Association and World Coffee Events. The truly unfortunate timing of this announcement—which came out overnight between the first and second days of the 2017 World Barista Championship in Seoul—means we’re faced with an enormously difficult logistic decision regarding our ongoing coverage of this year’s WBC, with a crew on the ground at this very moment in Gangnam. After considering a number of responses, including the possibility of continued coverage under protest, we’ve made the difficult decision to pull our coverage team from Seoul immediately, and to suspend any future coverage of Specialty Coffee Association/World Coffee Events competitions.

This is an enormously difficult decision for our small media company. Sprudge has covered the World Barista Championship live since the 2010 event in London, and have served as media partners with World Coffee Events since the 2012 season. We love these events, passionately and without caveat. We’ve learned so much by covering them, about what matters to us as a brand, about who is driving the industry and where it’s headed next, and about what really matters in coffee. (That’s not a secret: it’s the people.)

However, today’s announcement from the Specialty Coffee Association Board of Directors is wildly offensive and unviable. This language—”to protect competitors who may be prevented from participating in a world championship event due to nationality, ethnicity, gender identity, sexual identity/orientation, health, bereavement, or force majeure”—compares competing while gay under threat of legal penalty with that of a death in the family. It says that being gay is roughly equivalent to enduring a tragedy. It contains no protections, or event acknowledgements, of the dangers faced by queer volunteers, coaches, judges, vendors, members of the press, and traveling attendees in countries like the UAE.

Moreover, it places the burden of seeking deferment on competitors impacted by the SCA’s voluntary choice of hosts. Here’s the SCA’s exact language:

Under the new policy, national champions who have a qualifying circumstance that limits or prohibits them from participating may request to defer their world championship candidacy to the following year. National Bodies whose candidate’s deferment request is approved by the world championships committee of the WCE Events Advisory Council will be supported by a subsidy to cover additional travel expenses, should they occur.

Following through the logic of this policy, it means a gay or transgender competitor with reason to fear travel to Dubai must first out themselves to their national body, clearly indicating why exactly it is they feel unsafe in traveling to a nation with homophobic laws. This deferment request must then be approved by a WCE committee before deferment is approved.

We could shed thousands of words on why, exactly, this policy is bullshit, but go and talk to any gay or queer person and they’ll tell you: formal outing in the name of bureaucratic authorization is wildly insensitive, untenable, and unacceptable. This is a direct affront to queer, trans, and allied coffee professionals across the planet, and it now the formal policy of the SCA. It is inherently exclusionary; it places the burden of resolution on the victim of the SCA’s decision to voluntarily award events to countries with homophobic laws; and it does not protect anyone else involved in the equation, including the SCA and WCE’s own staff, many of whom are gay or trans or queer or consider themselves allies, and for whom, hoo boy, this has got to be a real shit show.

Each of us makes their own decisions in this world, and for coffee professionals whose work orbits the Specialty Coffee Association and World Coffee Events—be they competitors, volunteers, organizers, staff, sponsors, students, or aligned media—it’s decision time right now. That decision is especially poignant if you yourself are gay, trans, queer, or allied, or if there’s someone in your life impacted by the SCA’s blind eye to human rights and progress. Everyone makes their own decision, and this is ours.

We look forward to championing a new generation of grass roots coffee competitions as they develop around the world, from local roasting and latte art events to international tournaments like the Coffee Masters, to new events not yet dreamed up. Sprudge loves coffee competitions, and coffee competitors, and we’ve spent hundreds of hours following this beat around the world over the last decade. In the future we hope to continue to serve events that aren’t diametrically opposed to our personal and professional values as a small business, and as human beings trying to live non-shittily in 2017. It’s been a pleasure and privilege to cover these events for you over the last decade, and maybe someday we can again, but not like this. We cannot continue to eventize the Specialty Coffee Association’s stable of coffee competitions while this bizarre and problematic policy of deferment is in place, a policy that protects no one and cruelly shifts the burden for some cruel form of pseudo-justice onto the marginalized.

We know someone great is going to win this event in Seoul, and we wish them the very best of good luck throughout the weekend. Thank you for reading.