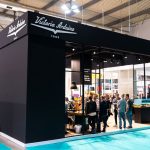 I left Milan a few hours ago, after five days spent inside Europe’s biggest coffee tech fair, HOST 2017. My mind is still buzzing from all the espressos (and the pastries, as they seem to be an almost inevitable accessory to drinking coffee here in Italy). I walked for many kilometres going back and forth between pavilions, meeting Italian and International manufacturers and learning about the hottest new tech.

It was my first time at HOST Milan, but my impression is that more Italian companies than ever before are branching out into the speciality coffee market and paying attention to the demands of independent coffee shops and small-batch roasters. The home-coffee sector seems to be growing too: many exhibitors at HOST Milan showcased mini espresso machines, coffee capsules, and home-brewing tools. In a big trade fair like HOST, speciality coffee plays a small role, but it’s interesting to see more companies opening up to new ways of producing and consuming coffee.

Simonelli Group, whose portfolio includes Nuova Simonelli and Victoria Arduino, isn’t new to speciality coffee. The last decade has seen Nuova’s iconic Aurelia and Black Eagle machines have graced international coffee stages, while their Mythos grinder—debuted at HOST 2013—is a mainstay at top coffee bars around the world. But they’re also claiming 10% of the global market share for espresso machine manufacturing, and you don’t get there by letting the bi-annual opportunity presented by a showcase like HOST pass you by. As in years past, Simonelli Group used the HOST platform to launch several new products, none more exciting than the debut of the Mythos Two grinder. This follow-up to Mythos One grinder on-demand—developed by World Barista Champions James Hoffmann and Gwilym Davies, along with World Barista Championship finalist Colin Harmon—Mythos Two provides an update on the Mythos’ proprietary Clima technology and upgraded weighing accuracy through implementation of the same “Gravimetric technology” patent Simonelli developed for the Black Eagle. Bigger burrs of 85mm are meant to increase productivity while reducing consumption costs and waiting time. Keeping the needs of small cafes in mind, Victoria Arduino worked on reducing grind noise, improving on the already-quiet Mythos One. This playful display pretty much says it all. Mythos Two was among the most buzzed about new products at HOST 2017. Expect to see the grinder at upcoming coffee trade shows world wide, in advance of global sales and distribution in 2018.

Elsewhere across Simonelli’s 35sqm festival booth, Nuova Simonelli also showed off the new Aurelia Wave, set to become the next evolution of the Aurelia range. Sporting a digital display and remote control interface, Aurelia Wave is a tech-forward espresso machine, offering the user live digital information with a focus on “smart water” and “pulse jet” technology. Simonelli’s work with the International Hub for Coffee Research and Innovation—a scientific laboratory created by Simonelli Group in collaboration with Camerino University—has shown them that between 50-70% of reliability issues in their espresso machines are water-related. Thus, the “Smart Water Technology” on the Aurelia Wave analyses inlet water to maintain the pH and TDS values within a certain pre-set range. If these values change, the barista is immediately made aware of it through a notification on the machine’s digital screen. It offers a degree of feedback and monitoring for water quality in real time without taking samples or using a third party measurement kit.

Meanwhile the “Pulse-Jet” technology optimizes the flow-rate and water pressure during the dispensing phase. By controlling the number of water pulses during the coffee extraction, the barista can in practice create different profiles in the cup. I tested three espressos made with the same coffee, but different pulse-jet profiles, and the differences in aroma and flavor were dramatic, changing completely from intense to medium to light across my cups. It’s worth noting that sustainability is another big part of the upgrade on the Aurelia Wave. Nuova Simonelli tasked the International Hub for Coffee Research and Innovation team with studying the CO2 emissions of its machines (combined from construction, use and recycling). Applying that research has allowed the Aurelia Wave to emit a full 10% less CO2 that its predecessor, the Aurelia 2. A new espresso machine and a new grinder—I’d say that’s a strong showing from Simonelli Group at HOST 2017, where the stakes are high and the pastries are plentiful. We’ve still got more reporting to come from Milan, so stay tuned, and if you want more beautiful coffee gear reading check out my look at some of the hottest new tech of the fest here. Simonelli Group is an advertising partner on Sprudge Media Network.