Sangenjaya On The Rise With Obscura Coffee Mart In Tokyo 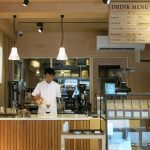 With Blue Bottle Coffee soon to open a new shop, Coffee Wrights nestled into the suburbs, and Nozy Coffee sitting quietly on the outskirts, the Sangenjaya neighborhood looks primed to start buzzing with specialty coffee activity. But if you want a taste of where specialty coffee originated here, you’ll want to visit Obscura Coffee Roasters.

I met with quality control director and founder Yoshinori Shiba at the newly opened Obscura Mart on Setagaya-Dori, a short walk from the Sangenjaya station. It’s a spacious wooden location filled with books, coffee paraphernalia, and a neat, clean case for the current selection of coffees. “We started here in Sangenjaya because it’s an easy place to live, and we always wanted to be a place for locals to get a cup of coffee,” says Shiba. “Sangenjaya felt right, and we’ve put our focus here ever since.”

The Obscura Mart actually began its life as part of the Maach Ecute selection of stores near Akihabara, but Shiba and Obscura recently made the decision to bring it back to Sangenjaya, making it their fourth location in the neighborhood.

“In the beginning, when we started, we wanted to start our own business and we liked kissaten culture and coffee,” he says. “So we opened Cafe Obscura because we wanted people to have a place to relax by themselves—we put a focus on quiet, and coffee, and atmosphere and books.” Around the time that Obscura started making specialty coffee a part of the local cafe experience, the staff roasted in a cramped location until business picked up enough for them to open the Obscura Coffee Laboratory in Taishido, on the opposite side of the station. The Laboratory was their roasting space until quite recently, but they now have a dedicated roastery not far from the original location.

Including the new Coffee Mart, Obscura’s three locations (the roastery is not open to the public) create a triangle around the central Sangenjaya neighborhood, which Shiba says is a part of the group’s desire to put more coffee in people’s homes and make it more a part of everyday life. “Sangenjaya is kind of split down the middle by the expressway, and there are lots of people on one side that never visit the other and vice versa,” he says. “So we thought it would be a good idea to set up shop on this side of town, too. We want to share and brew specialty coffee with people, but we also want them to learn how to enjoy it at home in their daily lives.”

This is key to the way the folks at Obscura have built their success; through making themselves a comfortable part of the community fabric. By setting up where locals are likely to drop by, Shiba says they’re able to build relationships with people who might become regulars over time. And when I ask about the recent explosion in specialty coffee over the past two years, Shiba says: “What I can say is, a boom is something that doesn’t last. So it’s better to put a focus on making coffee a part of local culture. The Coffee Mart wasn’t so much about starting in a new place, but making coffee a part of everyday life here.” And though Shiba laughs a little at the idea of anyone outside of the locals making the trip out to Sangenjaya just for the coffee, the future of coffee in the area seems to be riding a wave of success, and even if unintentionally, Obscura has put itself in prime locations for it.

The post Sangenjaya On The Rise With Obscura Coffee Mart In Tokyo appeared first on Sprudge.