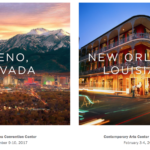 Breaking today via the US Coffee Championships official website, the long-rumored dates and locations for the 2018 Qualifying Events are now confirmed. They’ll take place in Reno, Nevada on December 9th-10th of 2017 and in New Orleans, Louisiana on February 3-4th of 2018.

Here’s more from US Coffee Champs:

The U.S. Coffee Championships (USCC) Preliminaries have concluded! Over the past couple of months, Barista and Brewers Cup Preliminaries took place at 8 events throughout the country, organized and hosted by local SCA Campuses and member facilities. You can view the results here.

Now, we are excited to announce the dates and locations of this season’s CoffeeChamps—the Qualifying Competitions for the U.S. Barista, Brewers Cup, Cup Tasters, and Roaster Championships! The top 8 baristas and top 4 brewers from each of the Preliminaries have earned themselves a spot in the USCC Qualifying Competitions, and the rest of the spots are open registration starting on October 25th.

CoffeeChamps will be held in two locations—in Reno, NV at the Reno Sparks Convention Center from December 9–10, 2017, and in New Orleans, LA at the Contemporary Arts Center of New Orleans from February 3–4, 2018.

Competitor and judging registration opens at 10am PST on October 25th. There are select spots available for baristas who did not qualify at the preliminary events, and they’ll go quickly.

Much more information is here via the US Coffee Championships official website.