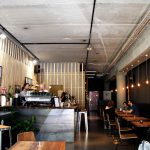 R/D is one of the Berlin coffee scene’s newest faces. Although most cafes in the city seem to be popping up in either Kreuzberg or Neukölln, R/D opened its doors in Mitte’s Silicon Allee, a tech startup space, in late June.

Steve Morris, the co-owner and manager of R/D, is also part of the nearby Oslo Kaffebar. Morris began his coffee career back in his native Scotland, where he was a barista until moving to Berlin in 2011. It was here that he dove head-first into the world of coffee, after drinking a cup of Bonanza (then known as Local Heroes) with his girlfriend. It was a sort of epiphany. “We’d literally never tried anything like it,” Morris says. “It was a weird yet wonderful sensation to feel so excited and curious about a cup of coffee. A few weeks later we stopped in their small coffee shop on Oderberger Straße and it was there that my eyes were opened to the world of exceptional, artisan coffee.” He joined the Oslo crew shortly after and eventually partnered with the cafe’s founder, Kristian Moldskred, to open R/D. Opening in Mitte at Silicon Allee isn’t the only defining factor at R/D. The cafe is also unique in its offerings. The menu has coffee, of course, but patrons will also find beer and wine, along with cakes made in-house and buttery croissants driven directly from Paris, all of which match the quality of R/D’s coffee. “Whilst beer and coffee are two completely different products,” Morris says, “the production of craft beer and specialty coffee is usually the result of passion merged with a commitment to maintaining high-quality standards. Rather than focusing on purely ramping up profitability by any means possible, these people strive to find ingredients of the highest quality and develop their ability to create amazing products, which are merited on how great they taste as well as how environmentally friendly they were to source, farm, ship, and prepare.”

R/D’s alcoholic and caffeinated menus meet in the Moonlight Coffee—a twist on a White Russian cocktail that mixes local vodka and milk with coffee. R/D’s interior caters to those looking for a nice place to work. Inspired by Japanese design, the sleek, airy space is adorned with wood and paper. “We looked at Japanese interior design a lot,” Morris says. “Our collective obsession with Japanese design stems from [its] approach to tradition and craftsmanship. The use of wood and paper results in a very calming surrounding, which is perfect for creating an environment [where] people can spend a lot of time in practicing, learning, relaxing, and socializing.”

As for R/D’s kit-out: “We love Kees Van Der Westen espresso machines,” Morris says. “At R/D, we have the newest Spirit Triplette. It’s a three-group dream machine that makes brewing amazing espresso very easy for any talented barista. Our grinders are a Mahlkönig EK 43 for filter and a Mazzer Kold for espresso, which we’re still having fun experimenting with. It’s developed to help baristas cope with busy coffee environments—its grind is incredibly consistent and it’s ultra quick and quiet too.” In the future, Morris looks forward to working with his peers in the Berlin coffee community. “We’ll cooperate with a number of local and international roasteries to host some cool events at R/D,” he says. “My business partner, Kristian, lives in Oslo, Norway and has close ties to Tim Wendelboe and Supreme Roastworks. Having those folks in R/D would be a dream come true and it’s something we’ll push for. We’ve had fun brewing their coffees in Berlin for years now so it’ll be amazing to host them in the building.”

While forthright about most things R/D, Morris was a bit mysterious about the meaning of the cafe’s name, although he did say it echoes “research and development,” being in Silicon Alee. Some hardscrabble journalism, however, suggests its email address may give us a better idea. R/D indeed.