RAWR Oakland: Come For The Coffee, Stay For The Cats 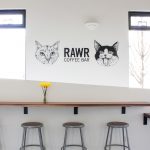 Credit Cat Flower Garden for the recent upsurge in animal cafes. The Taiwanese spot became the first place to satisfy both your caffeine fix and cuddle-puddle needs around 1998, though since then the trend has spread throughout most of Asia before eventually moving west. Meow Parlour and Koneko Cat Cafe opened in New York several years ago while San Francisco got its own KitTea in 2015.

From a marketing perspective, the model is a dream—addictive substance meets cuteness overload—and the actual benefits of human and animal interaction are well-documented and, frankly, pretty obvious. Now Oaklanders may rejoice: They have the recently opened RAWR Coffee Bar, a collaboration with Oakland Cat Town. Although Cat Town has had a cafe since its inception in 2014, its new partnership with natural cat-food company RAWR means that there’s more manpower to build out both the cafe and the adoption center. (Of course, it’s also good news for the orphaned cats of the world, as Cat Town has already helped more than 1,500 cats find a new home, according to its website.)

RAWR is the brainchild of Sabrina Simons, a former architectural drafter and photographer. She would be the first to tell you that, while she has no coffee or service industry background, she developed an interest in nutrition and foodstuff after her adopted cat began to experience digestive issues. What began as a strategy to help her own pet eventually evolved into the natural, vitamin-rich, and easily digestible cat-food company that it is today. She opened her first storefront in 2014 on top of her regular job, before opening RAWR in 2017. Located at the entry point for the “Cat Zone” at Cat Town, the space boasts an assortment of vegan, gluten-free, and standard pastries, “cat swag” (think T-shirts reading “The Golden State Rawriors”), kitty toys, and all-natural raw cat food and treats. The original cafe offered only pour-overs, but RAWR serves Highwire Coffee espresso drinks. All of this can be enjoyed while groups of 10 at a time are encouraged to wander into Cat Town to visit with the animals that are up for adoption—most of whom come from Oakland Animal Services, Feral Change, and Fix Our Ferals.

But the real question at hand: How’s the coffee? “I really want the neighborhood to have a shop with consistently great coffee,” says Simmons. “It’s funny, people will always say, ‘This actually tastes good!’” Which is a fair point. Considering the draw of kittens, many owners might be tempted to cut corners with their coffee program. “You don’t just have to settle for whatever we happen to give you,” she adds. “We’re striving for really good coffee and really good baristas in an atmosphere where you can learn more about cats.”

Having a cappuccino while petting kittens would be a pretty decent afternoon for anyone with a working human heart. If you’re a coffee drinker who needs some levity in your life (like most of us), I pray that you’re not allergic to cats. If you are, I hear a San Francisco–based rat cafe just opened up… The post RAWR Oakland: Come For The Coffee, Stay For The Cats appeared first on Sprudge.