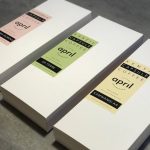 Specialty coffee in 2017 is a pretty big tent, qualitatively speaking. Over the past few years, the coffee industry has broadened its focus to include modes of preparation that have historically been seen as inferior. From pre-ground coffee packs by Blue Bottle to instant coffee from Voila and Sudden, from the super-automatic machines like the new Eversys e’Barista System (spokespersoned by one Matt Perger) to ready-to-drink cold brew by, well, practically everyone at this point, the modern wave of coffee is out to prove that the dichotomy between quality and convenience is a false one.

One of the major entry points for specialty coffee’s forays into the world of high-grade, convenient coffee comes via pods, most notably Colonna Coffee’s Geisha offering and the 100% compostable pods from Volcano Coffee Works, the sister company to London’s Assembly Coffee. The newest brand to take on the capsule challenge is Copenhagen’s April Coffee Roasters, who (and you may start to see a pattern here) also teamed up with Eversys to provide coffee for the e’Barista System. Roasting in a more Nordic tradition, April has created a seasonally changing line of pods compatible with Nespresso capsule machines. Before going any further, I should say that I’m extremely skeptical of new things. The highest praise I’d expect a coffee pod to elicit would come with a qualifier: “…for a coffee pod.” I mean, could Nespresso systems even accurately get water to an appropriate temperature for making coffee? Aren’t pods kind of the enemy?

What I found though was that the April pods were really good. Full stop.

After borrowing a Nespresso machine from a kind neighbor, I spent three days tasting each of the April capsule varieties—a washed El Salvador, a natural Brazil, and a washed Kenya—in all the formats the pod machine could make: ristretto, espresso, and lungo, coming in at 25ml, 40ml, and 110ml, respectively. For my palate, the pods worked best in the lower volume range of the ristretto and espresso, creating really nice sweetness and providing the more syrupy body one would expect to find in espresso (that said, the Kenya as a lungo made a pretty incredible coffee shot).

But what was most surprising was the April pods’—specifically the Kenya—ability to deliver origin characteristics. Let me repeat: THERE WERE ORIGIN CHARACTERISTICS PRESENT IN A COFFEE POD. Drinking the 40ml was not just good “for a pod” or even just a good cup of coffee, it was a very good cup of distinctively Kenyan coffee. Patrik Rolf is the founder of April Coffee as well as the roaster. I sat down for a chat (via electronic communiqué) to discuss these surprisingly delicious coffee capsules and some of the challenges in roasting coffee specifically for pods.

This interview has been condensed and edited for clarity.

Hey Patrik. Thanks for sitting down with us. Give us a little intro into what April Coffee is trying to do with their coffee pods.

The quick answer is that we want to make it easier for people to drink tasty coffee. Pods are a very user-friendly product. That being said, as with everything in life, it is not perfect. But we’d rather invest and try to change the game by being a part of it instead of sitting on the sidelines and argue about something we don’t really have insight in.

It is remarkable how many companies that are investing serious money in trying to improve every aspect of the capsules and we are very happy to be able to be a part of that.

I have a lot of questions. Who is the target audience? Whose palate is this designed for? Is it pod drinkers, specialty coffee drinkers, somewhere in between? Are you trying to convert pod drinkers into specialty drinkers?

April’s goal is to offer the tastiest version of any category of coffee we are working on: filter, espresso, espresso with milk, capsules, or fully automatic. We are creating taste experiences for people with an interest in taste. For April, the ambition is always to showcase the flavor potential in coffee. That goes for the pods as well. The feedback so far from any capsule drinker, with or without specialty coffee has been very positive. It is geared towards people that appreciate tasty coffee beverages.

How does the roast profile change from the whole bean coffee to the pods?

Roasting for capsules have been the most fun aspect of these and one of the main drives behind the project. I am a coffee roaster and the opportunity to have to tackle roasting in a new way is very exciting. The roasting differs a lot. It took me about six months to figure out how I want it and I am still improving the approach for every batch I produce.

At first, the focus was on roasting the coffee to be as soluble as possible, which at this point actually doesn’t make much sense. Give me a few more months and I will share some proper roasting data on it. What were some of the challenges you faced when creating the pods, that the average coffee drinker might not expect?

The biggest challenges were in understanding the material function of the capsule, grinding, degassing, and how everything correlates. The project turned out to be a lot more complicated than I thought it would be.

Was the water temperature of a Nespresso machine a concern? Presumably it can’t get up to the 195-205°F (90-96°C) range the SCA recommends. Did it affect how you approached making the pods?

How the coffee will be brewed is always a concern when picking green coffee and roasting. We believe in diversifying as much as we can when it comes to roasting for brew method—that is the only way to maximize the result. It was more of a challenge than a concern. That being said, it took about six months of trials before we started to get anything tasty. It has been a very tricky process, which is part of why it has been so much fun to do. Were there any concessions/changes you had to make to how you would normally do things in order to get the pods to taste how you wanted them to?

We tried about 20 different doses with a few different grind sizes on each dose before we ended up with how I like the coffee the best. Furthermore, it’s challenging to make a coffee that needs to fit into such a set-parameter of brewing since the machines aren’t very flexible yet—I am sure that will come. But a volume out of around 38-40g seems to be the most solid. I still don’t think the “longer” versions of the capsule coffee makes any sense. But the “shorter” versions are getting tastier and tastier.

The two Central American coffee pods I tried were very solid, straight forward espressos, but the Kenyan was one of the best shots I’ve had in recent memory and the flavor profile was definitely outside of what you would expect to get from a pod. Is the plan to always have at least one more progressive pod available for the adventurous coffee drinker?

The idea is that every version should be as tasty as it possibly can be. We here at April tend to like more “progressive” taste in our coffee and that is where the capsules are moving towards as well.

How frequently will the selections rotate?

Every third month. The range will get bigger and bigger as we go. Are the pods environmentally friendly?

That is the money question. Today they are not biodegradable, simply because those versions of the capsules don’t taste good and have too short a shelf-life. But April is committed to make the capsules a lot more user-friendly before 2018 or we will stop working with them. And we have some good stuff on its way so I am confident we will get to that point.

The capsules market is today one of the fastest growing markets in coffee and there is value in making sure that the market grows using good, ethically sourced coffee in the capsules rather than commercially traded coffee.

All photos by the author unless otherwise noted.