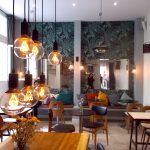 There’s a cafe scene in Cédric Klapisch’s cult coming-of-age film Le Péril Jeune where we see five high school friends hunkered around a table, razzing each other. At one point, the bartender shouts that they’d better order something or get out, to which Romain Duris’ character replies, “Give us a coffee with five straws.”

“We thought it was the perfect name,” says Egemen Tavsanci, co-founder of 5 Pailles (Five Straws) cafe, which opened in January in Paris’s 10th arrondissement. “One cafe, five friends,” he says, referring to Klapsich’s movie and 5 Pailles’ origin story. He and friends Bengisu Gunes, Can Atalay, Caglar Alpertunga, and Ezgi Senturk, all perched high on corporate ladders, decided to drop everything a year and a half ago to open a cafe. “We hated the coffee in Paris, so we thought, why don’t we open our own coffee shop?” he says. The transition was a big one, admits Tavsanci. “We went from the top of corporate life to the bottom of the service industry.”

Currently, 5 Pailles sources 50 percent of its beans from Paris-based Lomi. “We asked [them] to do tailored roasts for us. We prefer more fruity-tasting coffee as opposed to the dark roast Paris likes,” Tavsanci explains. In addition to having a solid roasting partner year-round, 5 Pailles works with a variety of guest roasters to keep things fresh and interesting for customers. When I stopped in, Bonanza’s Kenya Kainamui was being featured; it made for a great iced pour-over on an unbearably hot day in the city. While none of the original five “straws” had any experience in coffee, they knew someone who did: Ismet Emre Eralp, a Turkish barista who originally trained as a chemist. On my visit, he was taking advantage of a lull in traffic to work on his AeroPress process in view of the upcoming French competition. “[My background as a chemist] helped me to understand extraction principles and to develop espresso products,” he tells me, eyes riveted on an electronic scale. According to Emre Eralp, career options for young scientists in Turkey are limited; so instead of settling for what he describes as a copy-paste job, he decided “to do something I love for the rest of my life.” After stints at Cup of Joy and Kronotrop, he got the call to come to Paris. “I needed to go forward for my own development. If a project inspires you, you should listen to yourself,” he tells me. Part of what inspired Emre Eralp to join the 5 Pailles’ team is the enthusiasm of its founders for good coffee and service, as well as their desire to give the cafe a slightly different raison d’etre. 5 Pailles’ namesake movie has an undercurrent of rebellion, which Tavsanci and his peers identify with in more ways than one. “You will never find a banana bread here,” he says emphatically, gesturing to a pastry case full of moist cinnamon coffee buns, limoncello basil cake, and gingerbread with red fruits. And pastry mediocrity isn’t the only thing the 5 Pailles team is rebelling against. A former marketing director for a major pharmaceutical company, Tavsanci has taken a hard line against waste, and is bursting with ideas to make his cafe as socially and environmentally responsible as possible. As we talk about what’s next for the cafe, he lists a number of initiatives already or soon to be in place: sweet and savory fare is made fresh daily in the onsite kitchen, and nothing is thrown out; there’s at least one vegan and gluten-free option daily; in addition to using minimal packaging—salads are served in liter canning jars—the cafe also donates 10 cents of every coffee purchased to Eau Vive, an international organization focused on improving access to potable drinking water and supporting local development initiatives in African countries. Eyes bright, Tavsanci tells me about another idea to grow mushrooms using coffee grounds. “We are responsible for this world,” he says, excited at the hope 5 Pailles will serve as an inspiration for more cafes in Paris to join them in environmental stewardship.

“You have to be first, and others will follow.”

Kate Robinson (@KateOnTheLoose) is a freelance journalist based in Paris. Read more Kate Robinson on Sprudge.

The post One Cafe, Five Friends: 5 Pailles in Paris appeared first on Sprudge.