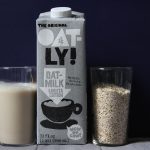 Wait, that isn’t how the song goes?

That’s news to Oatly, a Swedish-born alternative milk derived from oats that’s quickly taken hold among the most esteemed coffee bars in the five boroughs. In a city where every single element of business is competitive and “extra” shelf space is nonexistent, the rapid-fire spread of oat milk—of all things—across the city’s finer coffee bars is steaming up the scene.

“It’s been really surprising for us, too,” Mike Messersmith, United States General Manager for the Oatly brand told me over oat milk cortados one sunny Sunday in Manhattan’s Flatiron district. Since January of 2017, Oatly—specifically Oatly Barista, a creamy, coffee-optimized version of Oatly designed for steaming and serving in hot drinks—has gone from being served in only a dozen cafes to being available in more than 200 of the city’s coffee shops. From early adopters like Intelligentsia (which serves the alternative milk in its cafes nationally), Oatly’s been picked up by local chains like Café Grumpy, Joe Coffee Company, and Ninth Street Espresso, as well as many companies with smaller footprints like Sey Coffee, Kaffe 1668, Everyman Espresso, Cafe Integral, and Little Skips. If you just read off the names of some of the city’s best-respected cafes, there’s a reason for that. The company’s oat penetration strategy—to send friendly reps to all the city’s best coffee shops with free samples over and over and over—seems to have worked. It’s a gamble that the company, well-established in Sweden for more than two decades, could afford to make.

“The company wanted to wait until it felt like we were ready,” says Messersmith, who along with a small team has spearheaded Oatly’s grand entrance into the US market. The company already sells Oatly—in countless varieties from chai to chocolate milk to cream to “oatgurt”—in more than 30 countries globally, with its largest presence in the EU. To expand to North America, Messersmith says, the oat mogul felt it would be critical to gain a foothold in the barista community before large chains or grocery stores.

“It was a choice for us to try to pursue on-premise specialty coffee first,” Messersmith tells me. “Oat milk doesn’t exist for US consumers, as opposed to Sweden. We felt like we had a lot of work to do.”

Messersmith keeps a sense of humor about it all. “I mean, a lot of people, even my family, are still like, what? Oats? Explain that to me again?”

By and large, the city’s baristas have embraced it, largely because their customer base likes it, too. Jenna Gotthelf, a barista at Everyman Espresso admits, “As a consumer, I don’t really drink alternative milks.” But as a barista, finds her guests enjoy the product. “Customers have been asking for it,” says Gotthelf, “and enjoying it more than almond or soy milk. The Oatly brand steams nicely, so it is easy to work with.” Though the romantic notion of drinking exotic, creamy Swedish oats may appeal, US Oatly is derived more locally—from oats grown in the Western United States and Canada, and manufactured into oat milk at a shared factory in Minnes—oat—a. “Oats are an incredibly sustainable rotational crop,” says Messersmith, “they bring crop diversity to those parts of the country. As opposed to some plant-based milks that are very taxing, oats use less water and fewer pesticides,” he says, arguing that oat farming has less environmental impact than many other alternative milks, like recently-maligned soy and almond milk.

What’s the downside, then? Some drinkers wary of the stabilizing agents that most plant milks use may balk at the inclusion of canola oil on Oatly Barista’s ingredients list. Messersmith says that the oil is not used as a thickener—which isn’t apparently needed due to what he refers to as an “amazing enzymatic process”—but rather to add creaminess. They use a non-GMO canola oil, and it makes up about 2% of the product by volume. Among the Swedish oats

What it all adds up to in the cup is a neutral but creamy dairy substitute that’s muscled its way into those tightly packed New York cafe refrigerators—in some cases, kicking its sister soy milk off menus completely. For any coffee product to cause such a ruckus with such speed is unusual—in New York, it’s practically unheard of—and even tea professionals, who rarely agree on anything, seem to like it, too. Doug Palas, who runs Intelligentsia’s Kilogram Tea, says Oatly “accentuates tea flavors better than milk—it’s my default recommendation for tea drinks.”

Next up, the brand will continue to sow its oats in markets like Milwaukee, Denver, and of course, Los Angeles, whose artisanal alternative milk scene leads the nation. “The coffee industry in the US is really so connected,” concludes Messersmith of Oatly’s speedy growth. “When [baristas] find a brand they are passionate about that really gets them and delivers on that end product they care about, then…it’s really about facilitating, not pushing.”

Liz Clayton is the associate editor at Sprudge Media Network. Her world coffee guide with Avidan Ross, Where to Drink Coffee, drops this November on Phaidon Press. Read more Liz Clayton on Sprudge.