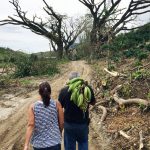 The devastation left by Hurricane Maria on the island of Puerto Rico has been cataclysmic. Many are without power and potable water, and relief efforts from the United States have come under severe criticism for being insufficient. Estimates of the damage caused have led CNN to refer to Hurricane Maria as the “$95 billion storm.”

But what does that damage look like? A recent article from NPR explores how Hurricane Maria decimated one of Puerto Rico’s specialty coffee farms and what it will take—and how long—for it to recover.

Hacienda San Pedro is a fourth generation coffee farm in Jayuya, Puerto Rico in the Cordillera Central mountain range. Roberto Atienza, a third generation coffee farmer at Hacienda San Pedro, tells NPR that Hurricane Maria wiped out 90 percent of his plantation. And it did so almost overnight. Compounding this problem is the fact that the harvest came late this year, with Atienza estimating that they had only picked around 2 percent of their crop before the hurricane hit.

NPR describes the coffee farm as being full of denuded trees and winding roads that had to be cleared by chainsaws.

“This was a beautiful place with a lot of trees,” she says. “It’s like a different place.”

Roberto Atienza claims that Hacienda San Pedro, which provides all the coffee for his daughter’s cafe, may have to discontinue exports in order meet the needs of the shop. Rebecca states that she may request a waiver to sell coffee grown outside of Puerto Rico in order to keep up with demand.

The Atienzas will focus most of their recovery efforts to parts of the farm least affected by the storms, but rebuilding will be an uphill battle. Roberto doesn’t expect to receive any new coffee trees to plant from the Department of Agriculture for another six months, because they were also severely hampered by Maria. But even then, the estimated $500,000 worth of damage will keep Hacienda San Pedro from having a good harvest for another three years at least.

There is no happy ending here, at least not one in sight. And it serves as a stark reminder that even though Hurricane Maria is not making the front pages of the news as frequently, relief efforts are far from over. If you’d like to help, consider donating to United for Puerto Rico, UNICEF, or any of the other charities listed here.

*all media via NPR