Night Of 1000 Pours: Join Us To Raise Funds On September 29th 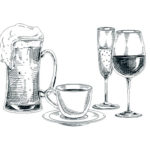 September 29th, 2017 is National Coffee Day, and the 8th anniversary of the launch of Sprudge. To celebrate we’re calling on our readers around the worldwide to join us in a new charitable initiative: The Night of 1000 Pours.

How is this night different from any other night? On September 29th we’re asking our colleagues, readers, and allies to take part in a global fundraising event. We want you to plan a throwdown, a brewing competition, a signature drink exhibition, or any other sort of beverage fundraising event, and donate the proceeds as part of this grassroots effort. You might also choose to donate a portion of proceeds from sales in your cafes, or make a corporate charitable donation. We’ll organize a new Night of 1000 Pours event every six months, and feature new charities each time.

Click here to register and host an event for Night of 1000 Pours.

For the inaugural Night of 1000 Pours event, we’re suggesting two really important charities—Houston Food Bank and the Transgender Legal Defense & Education Fund—but we aren’t here to dictate how you donate your money. Our goal is to activate the coffee community (and our colleagues in wine, beer, and cocktails) as a node for charitable fundraising and a force for philanthropy. You can raise funds for a local or national charity of your choice, based on what speaks to you and your community. Groups like Charity Navigator offer many worthwhile charities to choose from. We just want you to join us in throwing an event that gives back.

How do you get involved? Cruise over to Nightof1000Pours.com and get all the information, including an easy five-step process to set up an event, a FAQ, and an updating list of participating companies. We hope to feature you or an event in your area on that list.

We’re thrilled to kick off this initiative with a group of launch partners across the United States, including founding partnerships with the Greenway Coffee family of brands benefitting the Houston Food Bank and Everyman Espresso benefitting the Transgender Legal Defense & Education Fund.

Our launch partners include:

Either / Or, Portland, OR

Calling all creatives! You can throw your support behind Night of 1000 Pours by volunteering to create original poster art for an event in your city. Check out our poster info—we’re looking forward to featuring these posters in an upcoming feature series on Sprudge.

That URL again is Nightof1000Pours.com and we’d sure love to hear from you. Thank you, and thanks for 8 years of reading Sprudge!

The post Night Of 1000 Pours: Join Us To Raise Funds On September 29th appeared first on Sprudge.