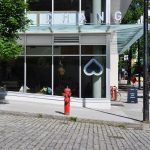 Opening on Valentine’s Day 2017 with a logo featuring an upside-down heart may seem a bit cheeky to some, but Nemesis’s primary owner, Jess Reno (pictured below in plaid), swears it was simply a funny coincidence. “The timing just worked out that way,” he says. “And besides, we have nothing but love for our community. But it’s love flipped on its axis—not the cheesy kind.”

One of Vancouver’s newest multiroasters, Nemesis focuses on bringing in some of the best coffee the world has to offer, such as Five Elephant, Talor & Jørgen, Pilot Coffee Roasters, Colonna, and April. By creating strategic partnerships with international roasters, Nemesis is figuring out new ways to make its coffee better every day. This simple quest is already leading the staff down exciting avenues, such as sharing water samples between the roastery and shop floor, all in an effort to innovate and provide the very best cup possible to their customers. Walking through the space, Nemesis is everything that is right about Vancouver coffee. It is a beautiful cross between Pacific Northwest and Scandinavian styling, with plant life and linear light fixtures accenting the sharp wooden features. The rectangular bar is immaculate except for its custom Synesso MVP Hydra, three Nuova Simonelli Mythos grinders, and two Mahlkönig EK/EKK 43s sitting alongside a V60 brew bar with Marco Über Boilers. The knowledgeable and well-trained baristas offer a friendly yet methodical service here, providing a welcoming atmosphere to those new to and familiar with specialty coffee.

It would be easy to imagine your average coffee drinker being intimidated by such an atmosphere, but this is simply not the case. Since Nemesis doesn’t offer a batch brew option, choosing instead a by-the-cup strategy, any confusion about pour-over and other brew methods is expunged by helpful brew cards providing basic instructions for how to properly use the equipment. Reno is passionate about educating whenever possible and preventing anyone from feeling intimidated in the shop. Following in the footsteps of local favorites The Birds & The Beets and Bows and Arrows, Nemesis has a food program that doesn’t miss a bit alongside their coffee. With a constantly evolving menu from chef Jacob Deacon-Evans, formerly of Vancouver’s Wildebeest, food is given just as much attention and detail. Local, seasonal, and sustainably conscious food inspire the menu—you may even catch staff foraging for ingredients whenever possible. Since quality is the most important requirement, the group considers whether any new potential menu items can be made completely in-house. An affogato may sound like a great idea, but Reno is quick to check with his kitchen to find out how hard it would be to make their own ice cream. As Nemesis slowly evolved into being, the team formed along with it. In addition to Reno, other owners including James Salmon, Michele Zuber, Cole Trepanier, Albert Tang, Josh Shevlin, and Deacon-Evans were added to the team as the notion of opening their doors became a reality. What began as a few friends kicking around a concept has led to a unique group coming from both competitive and international backgrounds. This diversity of experience creates a wonderful atmosphere of shared ideas and ensures that the highest quality product is being delivered. Nemesis has gone a step further in their learning by training all staff on both the food and coffee programs, regardless of title. This creates transparency between the pillars of their shop and it is evident in the way the staff speaks about every item on the menu. When looking to the future, Reno has a view that goes beyond specialty coffee. Nemesis itself actually began as an idea for a lifestyle magazine that would allow Reno and his friends to share everything that is great about Vancouver with the rest of the world. Without knowing their exact route forward, the prospect of starting as a coffee shop slowly took shape. Having now checked that box, the idea of a magazine is still real with a goal to eventually expand beyond coffee and even Vancouver. “We want to push community boundaries through coffee,” says Reno. Anchored by Nemesis and specialty coffee, the team hopes to put a fresh perspective on how to engage the community, both local and abroad. It is clear that Reno and his group have some lofty ambitions, but it is nice to know that for now, they will be discussing them with their customers over some great food and an outstanding cup of coffee.