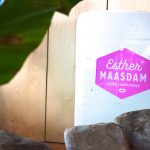 2017 has been a stellar year for Esther Maasdam. In March, the multi-title-holding barista champion, international consultant, and all-round coffee events stuntwoman was crowned Dutch Cup Tasters Champion. This was a new match to master for Maasdam, whose name is so often conjured with her ranking as Dutch Latte Art Champion (from 2011 through 2014, placing fifth in the world in 2013) and her current title as Global Latte Artist for Le Méridien.

But of the tasters competition, says Maasdam, “I loved winning it mainly because people were like, ‘Oh, so you’re more than just a milk girl.’” With 13 years of professional experience in the coffee industry, including as an authorized SCA trainer, the 31-year-old is definitively fluent in languages other than lactose. And although she didn’t reach the finals at the World Cup Tasters Championship in Budapest this past June, her participation in the category was a harbinger for the exciting new territory she is charting.

These days, Maasdam is cupping coffee with revived zeal—and consequence. In January, she and Australian import Ben Morrow, her partner in life and now business, launched Manhattan Coffee Roasters. Do not be misled by the name: the roastery is located in the Netherlands’ modern port city of Rotterdam.

“The nickname of Rotterdam is ‘Manhattan on the Maas,’” explains Maasdam, referencing the large river that empties into the North Sea. “So it’s a nod to that but saying at the same time that we want to be international; we don’t want to be Rotterdam-only focused.”

Plus, she notes, “It’s gotta be a name that Ben can pronounce, being his own business.” Broadmindedness and empathy are traits Maasdam possesses in quantity, so it is unsurprising that she considers her foreign-born boyfriend’s cultural comfiness. Long known as the “latte art cowboy” and, more recently, the two-time winner of Coffee Masters, Morrow was a barista at St. Ali in Melbourne for five years. The 28-year-old moved to Europe in August 2016, ready for an off-bar coffee job and a more in-person relationship (and in the meantime seems to have gotten the hang of Dutch phonology).

The two became acquainted at a side smackdown event during the 2014 World Latte Art Championship in Melbourne.

“We basically started smack-talking, and he was like, ‘I’ll kick your ass,’ and I was like, ‘No, I’ll kick your ass,’” laughs Maasdam. For more than two years, the Rotterdammer and the Port Hedland native maintained a long-distance relationship. They rendezvoused as frequently as possible at barista contests around the globe. Maasdam says she has “always been competitive,” a jock ever since her days of competing in the 400-meter hurdles at the national level.

Today, the transnational duo’s supranational enterprise has a surprisingly tropical headquarters, in the front of the house at Aloha restaurant. The lively space is part of Blue City, a hub for circular economy startups and urban farming projects—most famously, growing oyster mushrooms from coffee grounds. Formerly the beloved Tropicana waterpark, the venue has a wrap-around back terrace overlooking the Maas River and its iconic bridges. Inside, the furnishings are offset by ornamental stone walls and serpentine water run-offs, long dry. A seal statue still balances a beach ball on its nose, right behind Manhattan Coffee Roasters’ equipment. Aloha received a local award for Best Coffee Concept in 2016 and had been roasting its own beans under the direction of Jamie Jongkind. After he left to work for Nordic Approach, Maasdam and Morrow moved in, agreeing to roast all the coffee Aloha serves and sells in return for use of the Giesen W6 and space for their own roasting, cupping, and training sessions. Since their founding, Manhattan Coffee Roasters has seen a flurry of activity. The brand-new company was enlisted to roast for Daniella Nyström, a barista at Amsterdam’s Scandinavian Embassy who represented the Netherlands at the World Brewers Cup, as well as for Merijn Gijsbers, the Dutch barista champion. Besides providing Gijsbers with the Panamanian La Berlina Geisha that let him cinch the national title, Maasdam and Morrow served as his coaches and will be doing the same as he prepares for November’s WBC in Seoul.

As for the spread of their brand, the couple is more concerned with quality than ubiquity.

“I don’t think we’re gonna see ourselves in every cafe [in the Netherlands] probably, but to be able to get in some great cafes all over Europe, that would be fantastic,” says Maasdam. “We mainly wanna focus on high-end coffees. There’s a fair amount of specialty roasters in the Netherlands that are doing really great, but everybody is really sticking to those base-level coffees.”

Recipients of Barista Hustle’s Superlatives subscription got an early taste of Manhattan Coffee Roasters in June. That month at the World of Coffee, Morrow was handing out very fresh, juicy calling cards in the form of their Kirinyaga Kii, a washed SL28 & SL34 varietal supplied by 32Cup. Maasdam and Morrow have been happy to find they are as calibrated professionally as they seem to be personally. “We went through this period of time where we were discovering where our palates were and if we were in agreement. And we didn’t know at the start if we were going to be, if that was gonna work out,” says Maasdam. “But every time we’ve had a [cupping] table, we’ve been in super agreement on which coffees we like. We’re at the point where we trust each other. If either one of us says, ‘This is great; we have to buy it,’ the other one’s like, ‘OK.’”

At home, the couple lives with an adopted cat, Geisha. She was named by her previous owner not after the coffee, but rather the variety of Japanese entertainer. Maasdam and Morrow take turns making the morning coffee, mostly using Kalita or V60 preparation methods; the individual who does not get out of bed to brew gets to select the beans. On an average day, they ride their bikes together to Aloha.

Although Maasdam happens to have studied graphic design, she asked her friend Jessica de Ligt of Goddog to create the Manhattan Coffee Roasters logo. In clean white lines over a salmon-colored circle, it depicts Rotterdam’s Erasmus Bridge. Nicknamed The Swan, the part cable-stayed, part drawbridge is a flexible, elegant manner to cross the Maas. Speaking of that body of water, Maasdam confirms that she, like their cat, has an uncannily appropriate name. “Yeah, it’s ‘the dam at the Maas,’” she gives as the literal translation of her Dutch surname. “So I’ve not gone far from my roots. This river is my roots.”