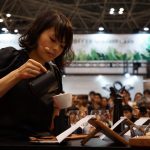 And yet, if you ask her how she does it, she’ll tell you it’s good fortune.

And perhaps some of it is. Because when you listen to Miki Suzuki talk about coffee, you listen to a woman who is very good at finding and preparing for, moments of just that; good fortune.

Suzuki’s coffee career started at a local coffee shop in her hometown of Yokohama, in Kanagawa. She spent approximately a year there learning the ropes before moving to the burgeoning Maruyama Coffee, then just a company of around twenty people.

It was a surprising move for the young Suzuki. At the time, Maruyama Coffee’s only cafes were located some two hundred kilometers from Yokohama, in the quiet countryside of the Nagano and Yamanashi areas. “When I started in coffee, I was vaguely aware that I wanted to make it a living,” says Suzuki. “And I knew if I wanted to really learn barista work, it would take years. In a way, [moving to the country] was a chance to get away from the temptations of city living and focus.”

And so it was here, among the lush greenery and countryside quiet, that Suzuki built her barista career, becoming store manager at the Risonare coffee shop in Kobuchizawa, and competing regularly on the domestic circuit.

But competitions, presentations, and performing for an audience were not things Suzuki was used to; she considers herself shy and timid, and was initially hesitant to compete. However, many of the coworkers Suzuki looked up to were regular competitors themselves, and with their encouragement, she began entering competitions. Suzuki says she’s fortunate to have developed a career in this environment, and fortunate for the help, coaching, and support of her co-workers, who helped push her to a first JBC win in 2010. That year would see her take 5th place at the WBC.

The following year, she won the JBC again (placing 4th at the WBC) and her most recent 2016 JBC victory marks the first time in the history of the competition that a barista has won on three separate occasions. Suzuki hopes to follow this by also becoming the first woman to win the world championship this year in Seoul.

And though presentations are still a difficult, nerve-wracking experience for Suzuki, she also adds—with a bright, cheeky smile—that there’s something of a selfish pleasure in them, too.

“At a competition, the judges will sit and listen to you talk about something you love for fifteen minutes. I can’t get a single customer to do that.”

She laughs when she says it, but it also offers insight into her approach; the simple joy of sharing what she loves plays an important part of Suzuki’s style and motivation.

“I think presentations are about expressing what you love and feel about a coffee, and having the audience empathize with that. But it’s important to make your presentation accessible and easy to understand, too; if your words aren’t understood, they’re just sound.” And it’s perhaps easy to think that this approach—combined with her choice of coffee—is how Suzuki manages to rate so consistently high among Japanese baristas. But it’s perhaps her reaction to winning her first barista championship that really shines a light on her growth.

“[After my first barista competition] I felt that as barista, and as a person, I was still immature and inexperienced,” she says, “so I wanted to grow through competition experiences. But even after I became the Japan Barista Champion, I still felt like I lacked the abilities expected of the position. When I entered the WBC, too, it taught me a lot about how I could get better.”

The comment is a glimpse into how Suzuki improves; by constantly creating platforms on which to polish skills, and evaluating them to ensure constant growth.

“I knew when I joined Maruyama that what people expected of a barista was more than what I was at the time, and I was conscious of that. Knowing where I wanted to go helped me realize what I was lacking, and how I was supposed to get there, and I could focus on that in my practice.”

And though Suzuki might credit her career success to fortunate circumstances—a great workplace, great people around her, great experiences—you can’t help but feel that it’s her mindset that takes her to these places, or otherwise brings them to her.

So it’s perhaps not surprising that her own goal is simply to inspire others with this simple, dedicated approach.

“I don’t feel like there’s very much that I can do well, actually,” she says, laughing. “I mean, I’m not particularly skillful, I’m not athletic, and I’m not especially intelligent, either. But I do have the ability to endure. I hope that by showing people I can succeed, other people might be inspired to reach their dreams, too.” This is what makes Suzuki approachable and easy to talk to, despite her accolades; she simply sees herself as a hard worker fortunate enough to have had some success. Coffee has enriched her quality of life and given her great opportunities, and she wants to repay the favor through her work.

This might be why, when I ask her what she likes the most about coffee, she says it’s the human component. It’s why she enjoys her work as sales planning director, and still works the occasional weekend shift at the Nishi-Azabu Maruyama coffee shop.

“For me, it’s the people,” she says. “It’s the connection between people, the connections you make, and the people coffee connects. Isn’t it incredible to think that the beans in a single cup of coffee have traveled the world to get to you?”

“Without these connections,” she adds, “you simply don’t get delicious coffee.”

Some photos courtesy of Sonia Cao.