LUME: It’s A Grinder, It’s A Flashlight, And It’s On Kickstarter Now 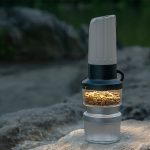 When you go camping, especially when not of the car or glamp variety, you want to pack light. You need to be able to carry in everything you on your back, so multi-use tools are a big plus. And of course, coffee is a necessity. Good coffee. And so is a flashlight. Now bear with me here, but what if your grinder was ALSO your flashlight? That is the conceit behind LUME, the coffee grinder/flashlight combination now on Kickstarter. And it’s so crazy it just might work.

Admittedly, for this idea to not just be a weird mashup for mashup’s sake, both sides of the equation—the grinder and the light—have to work well. But the LUME may just be up to the task. At 22 ounces, the LUME is about the size of a water bottle and is the “lightest auto-grinder on the market.” At full charge, it can grinder up to 50 cups of coffee (or 20 hours of illumination).

And if the video is any indication, the LUME makes for a pretty consistent grind. Using a patent pending stabilized conical ceramic burr, the LUME claims to have greater particle size consistency that that of other portable/hand grinder because they have an unstabilized burr that “rocks back and forth.”

As of writing this, the LUME was over halfway to reaching its $14,980 goal with 23 days to go. Retailing at $89, backers can snag their own flashlight grinder for as low as $59. Or for a little extra, you can get a limited edition LUME in matcha green or rose quartz.

So you have to ask yourself, “Do you need an automatic hand grinder that can also be used as a flashlight?” If you’re reading this, then the answer is yes and we all know it. And if the grind consistency is as good as advertised, then you don’t even have to use the flashlight feature. But why wouldn’t you? IT’S A COFFEE GRINDER THAT’S ALSO A FLASHLIGHT!

*all media via LUME

The post LUME: It’s A Grinder, It’s A Flashlight, And It’s On Kickstarter Now appeared first on Sprudge.