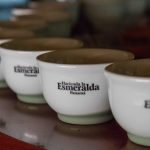 Back in July, we reported that a new record had been set for the price per pound of green coffee sold at auction. Part of the 2017 Best of Panama auction, the winning 100-pound lot was a natural Geisha from the Cañas Verdes Farm—part of the esteemed Hacienda La Esmeralda in Boquete—and sold for a staggering $601/lb to Hong Kong businessman Jason Kew of Kew Specialty Coffee Co LTD. And in November, that coffee will be available in America, in very, very limited quantities.

Southern California’s Klatch Coffee secured 11 pounds of the now-named Esmeralda Geisha 601, the only roaster in America to acquire any of the coffee. Starting November 18th, Klatch will be selling approximately 250 eight-ounce cups of the world’s most expensive coffee through a “series of ticketed events at Klatch Coffee’s Rancho Cucamonga location and for purchase online,” per a press release. The cost for each cup of coffee, made with 15 grams of the Geisha, will be a whopping $55 dollars and includes a special souvenir mug.

From the press release:

“We at Klatch are committed to sourcing the highest quality coffee and bringing new and innovative products to consumers,” says Klatch Coffee Owner Mike Perry. “The moment I tried Esmeralda Geisha 601 at the Best of Panama Competition this summer, I knew it was something I wanted to share with coffee lovers in the U.S.A taste of this varietal provides a coffee experience unlike any other – its notes of peach, blackberry, jasmine and other fruit flavors are so bold, so flavorful, even an untrained a palate will find it remarkable.”

$55 a cup is nothing to sneeze at (and you definitely should not sneeze at it; it will mess up the aromas and the mouthfeel), and that may be a bridge too far for even some of the most hardcore coffee drinkers. But it nevertheless constitutes what may be a once-in-a-lifetime experience. I know I’m going to try to be a member of the lucky one in 250. My real concern is: what if I can’t go back afterward? I don’t have $55/cup sort of money.

*top image via Chasing the Vine