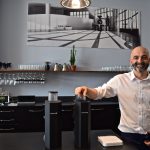 A lot has happened in the career of Javier García since 2011, when Sprudge first interviewed the “Spanish barista champion and kind-hearted coffee paragon of Basque Country.” For starters, six years later, García is at his own cafe in San Sebastián, in the Basque province of Gipuzkoa.

Sakona Coffee Roasters is located on the Urumea River, right where it feeds into the dramatic Bay of Biscay. The venue, with its polished post-industrial interior, has a façade of glass. It invites in light and provides a clear view to the opposite bank, including that of the Hotel Maria Cristina, a favorite squat among Hollywooders attending the annual film festival taking place later this month. Nearby is the Zurriola, an unassuming beach where wetsuited surfers dance on waves like bonito flakes on a hot plate. The cafe opened on February 6, 2016, though “only for two hours that day, I remember,” says García. An accompanying smile signals contentment as much as a patiently acquired taste for his own fastidiousness.

Being Type A surely helped García win the title of Spanish barista champion straight through from 2008 through 2011—when he went on to place fourth in the World Barista Championship—and in 2014. That year, he also collaborated with Spanish roasters Right Side Coffee to, as García puts it, explore what happens if you put him “with an espresso machine in a bakery with really good coffee.” What happened was that people began asking: “What is this?” he recalls. “They started talking about coffee in a different way. And I smelled the potential.”

Within nine months, the barista was ready to follow his nose. He left the bakery known as The Loaf (its first incarnation still around the corner from present-day Sakona), and by December 2015, had established his roastery in Irun. Some 20 kilometers east of San Sebastián, on the French border, Irun is García’s hometown. Besides supplying the cafe, Sakona fires up its Probat UG15 for wholesale business, offering monthly changing single-origin coffees for espresso and filter. Additionally available is a blend, two parts Brazilian Arara and one part Guatemalan Bourbon. It is named Jaizkibel for “the mountain that I look at each time I roast,” notes García. He knows the choice raises eyebrows in some circles, but given the relative rarity of specialty coffee in the Basque Country, a blend seemed pragmatic.

“Because we are a small company, we can [create] a tasty blend, and we can compete with the big companies’ prices,” García explains. “In Madrid and Barcelona, they have the opportunity to focus on more specialty coffee—or to close doors, saying ‘only single-origin’—because there are a lot of young people opening new shops. But here, no. Here there are a lot of professionals, bars, and coffee shops that are old-fashioned, but they want to improve and, at the same time, they don’t want to change the price of a cup.” Currently, Sakona sources most of its green beans from the UK’s Has Bean Coffee. Within three years, García hopes to do some origin trips himself, notably in Central America. In fact, it was speaking with Salvadorian producers and tasting Kenyan coffee at the 2009 WBC that led him to “the cup that can change your mind forever.” Garcia at the 2014 World Barista Championship

Long making a living as a bartender, García professionally committed to coffee in 2008. For two years, he worked as a barista trainer for Spanish cafe and roaster conglomerate Grupo Dromedario. Its renowned head, the late Emilio Baqué, had so much faith in him, García recalls, that he straightaway articulated plans for the two to begin a barista school and develop a specialty coffee line. Baqué also envisaged García as a co-author. That much is stated in an inscription, by the boss to his new employee, in El Cafecedario, a book on cafe culture that Baqué published in 2006. García’s copy stands flushed against his WBC trophy over a shelf of AeroPresses. Inside, the handwriting instructs:

Read this carefully and start thinking about the book that we will write together. We will call it “Baristología: A Treatise of Barista Science and Its Glorification,” to become the bedtime reading and reference for any self-respecting barista. The note is dated the day of the Spanish Christmas Lottery 2008. In September 2009, Baqué died of cancer.

In 2017, García can be found gazing at the Jaizkibel Mountain—roasting—on Tuesdays. The rest of the week he rotates cafe shifts with a regular staff of four. Equipment includes a Victoria Arduino three-group Black Eagle and two Mythos One grinders, a Mahlkönig EK43 grinder, and a Marco SP9 Twin brewer used with Chemex and Kalita Wave for pour-overs. A couple of beers are on tap. There are bottled drinks and fresh baked goods. The head barista and operations manager role is deftly filled by Juanmi Cuesta, who has over three years of experience working on bar and in management at 3fe in Dublin. A mountain lends its name to Sakona, too. It sounds Japanese to some ears, García concedes, but the intention was just to “find a word in Basque that’s simple to pronounce for the whole planet.” Cafe frequenters—comprising locals, expats, tourists, surfers, skaters, and señoras—attest to a broad appeal. Back in May, Sakona proved most accommodating to the regional AeroPress competition.

On the topic of competitions, García is quick to bring up his performance at the WBC in Rimini. “I have in my heart, like a little”—he makes the noise of a branch snapping after an ice storm—“because my last year competing was a disaster,” he says.

As Sprudge Live reported: “In what can only be described as a heartbreaking turn of events, Javier Garcia has called time at around 4 minutes into his #wbc2014 routine.”

García elaborates: “I did what I thought was best, but after talking for one minute and a half with the judges, serving the espressos, boom! Blackout.” He decided to quit his performance altogether.

Sugar comes in mini mason jars at Sakona, but García cannot sugarcoat his self-reproach. And yet, with three more years of baristología under his apron, today he has more confidence. “OK, everybody, I’m getting old. I’m the grandfather of the baristas,” he laughs. “But if Sakona gets its rhythm, and I can focus on other things, I would like to compete again.” “Because now I own Sakona—for me it’s like a dream come true. I’m 45 years old. I think I can do something different than the young people,” he continues. “For me now, it’s very easy to get a really tasty coffee and to prepare something solid… I’m not saying ‘Yes’ and I’m not saying ‘No,’ but it’s still on my mind. Why not?”

Then, as though projecting himself into future championship floor banter, he adds: “Guys, you know me, because everybody at the WBC knows me. You know me. Javier is back. Enjoy your coffee.”