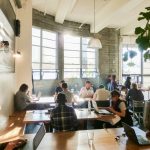 The coffee shop is a great place to get some much-needed work done. There’s just something about it that jumpstarts the productivity. Maybe it’s the caffeine, maybe it’s the romanticized notion of being one of those fancy, creative types that works on their novel while sipping on an espresso. Indeed, we may never know what it is that makes coffee shops engines of output.

Except that we do. It’s the noise.

Ambient noise has previously been studied and believed to promote creativity, but according to a new article in the Harvard Business Review, coffee shops have the right sort of noise, both in terms of volume and content. The article found that the ambient noise in your typical coffee shops clocks in around 70 decibels, which is the sweet spot for noise levels, “not too loud and not too soft.” This, according to a study, is “the right level of background noise [that] may disrupt our normal patterns of thinking just enough to allow our imaginations to wander, without making it impossible to focus.”

But it’s not just the noise level itself that makes coffee shops great places to work, it’s also what comprises those noises. Specifically, it’s all the boring sounds. The 70 dB at coffee shops usually come in the form of machines humming along or chatter from other customers, and neither of these things is generally interesting enough to distract us from the task at hand. Contrast this to the office, where “we can’t stop ourselves from getting drawn into others’ conversations or from being interrupted while we’re trying to focus.”

So if you’re having trouble breaking through and finally getting some quality work done, step out of the office and take your laptop to the coffee shop. Besides, even if you don’t get any work done, you’ll still be at a coffee shop. That’s pretty sweet.

The post It’s Easier To Get Work Done At A Coffee Shop Than In An Office appeared first on Sprudge.