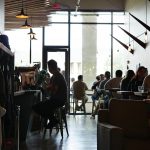 Many coffee shops seem to struggle when it comes to striking the right balance between authenticity and trying to be “on brand.” Realness is often found in imperfection, in intentionally eschewing some aspect of a full cafe experience. “I do coffee, why would I care what’s on the walls?” But some shops can lean too far to the other side and feel overly designed, curated to the point of sterility.

And then there are shops like Indy Coffee in San Antonio, Texas, whose brand identity is articulate and flawlessly executed all the while being a genuine expression of owners Alex Lee and Jake Scott. This brand identity is something that can only be described as West Texas punk rock. It’s Vans Sk8-Hi hi-tops meets American traditional tattooing, seen through a dusty Midland-Odessa lens. And it’s this aesthetic that brings Indy to life.

Walking in through the back of the shop, I was greeted first by an aroma familiar to anyone who grew up in Texas, that of burning piñon wood. As I turn the corner, past the skateboard decks hanging on the wall emblazoned with a radical Virgin Mary, I notice the very same adobe tepee incense burner that would emit aromatic smoke daily in my childhood living room. Moving farther into the space, the unmistakable warmth of vinyl can be heard over background cafe chatter of a busy Friday afternoon. Right now it’s Waylon and Willy. Next up is Wu Tang. Indy’s interior is full of Texas iconography: a cow skull hanging on the main wall, Lone Star beer cans repurposed into cacti planters, traditional cotton Texas and American flags. The owners have added some personal touches as well, some for sale and some for show. It is these items—the tattoo-ready flash art on the walls, the Zippo lighters Scott has etched with various designs, the hand-stitched patches made in collaboration with Austin’s Die Trying TX—that elevate the aesthetic beyond simply “West Texas” and into something uniquely Indy. And interestingly enough, very few of these designs relate to coffee.

“Alex and I have a lot of interests outside of coffee and we wanted to bring in those other elements and share them,” says Scott. “We think of Indy not only as a coffee shop but as a platform to share and showcase all the other things we’re into. Everything ties into that Texas/American Southwest aesthetic. We really wanted to incorporate those elements with a well-curated, cohesive collection.” But Indy isn’t a slave to brand or ideology. Many decisions about the shop were informed by the company’s history, in particular, its beginnings as a coffee truck. Back before Lee and Scott opened this space—coming up on two years now—Indy was a cramped, no-frills affair. This meant serving batch brew instead of pour-overs and only using alternative milks for espresso-based beverages because there was no room for two types of milk. Both remain staples at Indy’s brick-and-mortar spot.

Even their choice of roaster—Brooklyn’s Parlor Coffee—happened more by chance than by choice. “Early on in the truck days, we were looking to bring in an out-of-state roaster,” says Scott. “We hate over-saturation and believe it is our job to bring in and share unique products with our city. Alex was in NYC getting coffee at Kinfolk, which worked with Parlor at the time. He had a cup of coffee he really dug, so he brought a bag back, we cupped it, and we loved it.” But with the cafe, Indy has room to spread out. This end to their austerity measures comes in the form of a reclaimed Texas longleaf pine bar top created by Adam Young of Old Crow Custom Works using 130-year-old lumber pulled from a defunct Waco schoolhouse. On top of this sturdy piece of Central Texas history sits a two-group La Marzocco GB5 and a black Mazzer Major grinder (adorned with skateboarding stickers of course) that form the espresso program.

Another addition the larger space has afforded is a small but well-executed food program. The menu offers coffee-shop standards such as daily pastries, yogurt and granolas, and avocado toast (though Indy’s version has been given a Southern twist with the addition of lime, queso fresco, and red chili flakes). But Indy’s originals are the best part of the food program: a rotating selection of scratch biscuit sandwiches. During my visit, the chorizo and house-made pineapple jam biscuit stole the show; the sweetness and the spice were balanced beautifully and paired exceptionally well with an alternative milk cappuccino. It would be easy to discredit the quality of the coffee and the service at Indy simply because its branding is so on point. I mean, a “real” coffee shop wouldn’t burn incense or serve only batch brew or only use alternative milks (and if they did, you certainly wouldn’t hear the end of it), right?

And yet, Indy is a “real” coffee shop, and a damn good one. The thoughtfulness that is evident in its branding is just as present in its coffee service—batch brew included—and in its food selection. It’s the execution of this thoughtfulness that makes Indy unique. It’s West Texas punk rock. It’s Alex Lee and Jake Scott. Zac Cadwalader is the news editor at Sprudge Media Network, and a staff writer based in Dallas. Read more Zac Cadwalader on Sprudge.