Houston: A Halloween Throwdown At Inversion Coffee This Saturday 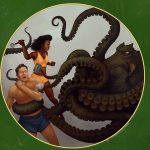 Did you know that the song The Monster Mash is actually a song about another song (and associated dance) also called The Monster Mash? I read that the other day and it messed me up pretty bad. But that’s the sort of Halloween tid-bit that’ll make you the (after)life of the party going on this weekend. And if you’re in Houston—here on out referred to as Boo-ston—you can use that hot gozz at Inversion Coffee’s Halloween Throwdown.

This will be Inversion’s second annual Halloween Throwdown and it is sure to be a ghoulish affair. Costumed baristas will be getting down on some head-to-head latte art action, and this time, the milk won’t be screeching because it’s being improperly steamed. There will be a Halloween photo booth, and a tasty assortment of treats will be provided by Chicken Box Delicious and Morningstar, which for Halloween we can call by its real name: SATAN! Beelzebub, maker of delicious donuts!

A look inside Morningstar’s donut operation.

And just because it’s a dead man’s party doesn’t mean they can’t do good by the living. All proceeds from the Halloween Throwdown go to the Montrose Center, a Houston-based organization empowering the LGBT community and their families to “enjoy healthier and more fulfilling lives.”

It all gets going this Saturday at 7pm at Inversion Coffee. For more information or to RSVP, visit the Halloween Throwdown’s Facebook event page. So go have fun, you groovy ghoulies and pour like your life depends on it. Because, it just may! mwahahahahahaha

Ok it doesn’t, but let me have this one. I really love Halloween. The post Houston: A Halloween Throwdown At Inversion Coffee This Saturday appeared first on Sprudge.