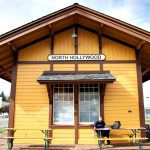 Groundwork Coffee Co. is one of the original LA coffee chains. Unlike some others, however, it’s still independently owned and remains true to its roots. After the first Groundwork location opened in 1997 in Venice, the roaster has now expanded to various parts of the city, including Hollywood, Downtown LA, and North Hollywood—there’s even an outpost in Portland, which opened just last year. Owner Jeff Chean has been at the head of the company since its birth, and today he strives to keep Groundwork’s quality standards the same as they’ve always been. Whether it’s sustainability, developing relationships with growers, or its commitment to supporting organic coffees, Groundwork maintains its core values. While Groundwork North Hollywood operates under the same guiding philosophy as the roaster’s other locations, its location is totally unique. The company tends to open spaces in historical sites, but the NoHo location is an eye-opener. It’s situated in the historic North Hollywood Lankershim Train Depot, which at 121-years-old is definitely historic. The depot sits on Lankershim and Chandler, right at the intersection of the Red and Orange bus lines—some of the city’s busiest. After being closed down for almost 30 years, there was a revitalization effort by the city and Metro to fund the restoration of the station. Chean says that when he realized the space was being restored four years ago, he began making calls and pushing for the possibility of setting up a Groundwork space. He won the bid, and the cafe opened in February of this year. The build-out was no small feat. After all, Lankershim was first opened in 1896 and had been closed to the public since 1952. “When we took possession,” Chean says, “it was essentially a shell,” that had to be carefully revamped to accommodate a cafe and functional food space while the character of the depot remained intact. Chean wanted to bring life back to the area and make it a community gathering space once again. “Opening in the depot is significant because it was the hub of the community for decades before LA’s light rail system was shut down,” he says. “Now, Metro and the City of LA have breathed new life into this corner and put it back in its place of prominence in the community.” Walking inside is truly a trip back to a more classical LA. Visitors can still see a lot of the original details of the building—the fact that it’s a historical landmark means that most of the structure had to be preserved. Chean felt it was important to “keep the feel of what a cafe 100 years ago might have felt like.” The only new additions have to do with the coffee—at this space, patrons will find a La Marzocco GB5, Mahlkönig K30 Twin espresso grinder and bulk grinder, Curtis Seraphim under-counter brewer, and a custom (environmentally friendly) R/O water system. There’s also a kitchen, so the menu offered here is the same as other Groundwork locations. In the future, Chean hopes to offer more items on the menu—dinner may be in the works. Also, with the makeup of the space, it’s ideal for a variety of events. “Oh yes,” says Chean. “The space is perfect for live music. We will continue our art program curated by Art Share LA. The sky’s the limit.”