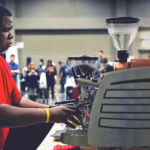 Today we’re featuring Avalon Coffee, a new convenience store / coffee bar concept coming to the Eckington neighborhood of Washington, D.C. The person behind this project is Adam JacksonBey, a prominent member of the DC coffee community who is striking out on his own for the very first time.

JacksonBey—who competed in the 2017 US Barista Championship Austin qualifiers—is a longtime board member at DMV Coffee, “a grassroots organization that serves the coffee community in the greater D.C. area” through a variety of events like cuppings, happy hours, and a popular monthly @TNTWDC latte art throwdown event. That throwdown has been running since 2008, making it one of the longest continually running throwdown events in North America, and JacksonBey has served as MC for nearly every one of these events since 2014.

Avalon Coffee is named for JacksonBey’s love of “mythology in general and Arthurian Lit in particular,” he tells Sprudge. “Avalon also means ‘the isle of the apples‘ and I like naming things after apples being that my name is Adam.” The cafe will be located inside of Yang Market, a 35-year strong bodega with a newly launched deli sandwich program that’s drawing rave reviews.

JacksonBey plans to serve coffee from Counter Culture Coffee, offering “a full espresso bar, drip coffee, and seasonal beverages.” Look out for offerings like a riff on his US Coffee Champs signature drink, made using coffee from the Tairora Project in Papua New Guinea, plus lime juice and an allspice/cinnamon syrup, making for “a pumpkin-esque fall beverage.”

Between his community activism and sense of humor—in the course of writing this article, JacksonBey’s Twitter handle has been both The Nutty Sprofessor and This Magic Sproment; onstage at US Coffee Champs qualifiers he told the judges “dialing in a coffee comes down to three things: space, time, and love;” his email sign-off reads “Potentially Good Barista”—it’s hard not to root for Adam JacksonBey. You can support his project now live on Go Fund Me, where the campaign is currently trending. The project is set to open in mid-September, construction and permits willing.

Got a worthwhile cause or project currently seeking crowdfunding? Reach out to Sprudge.