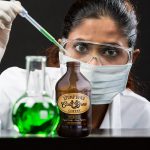 Of all the criticisms leveraged against cold brew over years, the most compelling one has always been, “Is it safe to drink?” The thrust of the argument states that since cold brew is made at colder/room temperatures, it is susceptible to the growth of harmful bacteria. E. coli, Ebola, E-Harmony: who knows what could be growing in your cold brew. But a study performed by researchers at Oregon State University’s Department of Food and Science Technology says, “Nothing. Nothing is growing in your cold brew.”

For the study, researchers intentionally introduced E. coli, Salmonella, and Listeria into commercially available cold brew to see how the pathogens would survive. The cold brew was acquired from Stumptown Coffee Roasters, who commissioned it as a challenge study “for the way that [they] handle cold brew through the brewing, bottling, and supply chain,” per Stumptown’s Vice President of Cold Brew Diane Aylsworth. The infected cold brews were then commercially refrigerated for up to three weeks to see how the bacteria colonies grew. They found that “no growth of any microorganisms was observed during this period but rather they died off during that time.”

The researchers concluded that cold brew “does not favor the survival or growth of vegetative bacterial pathogens most likely due to a lack of microbial nutrients and or the presence of antimicrobial factors originating from the coffee.”

Aylsworth does note that the scope of these findings are limited. “As with most challenge studies, this is not a blanket statement for the industry, as it is specifically about our process… but it is good, directional information.” Given the findings though, it points to properly refrigerated cold brew being inhospitable to bacterial colonies.

So drink your cold brew, cold brew drinkers. It’s not going to kill you. From a food-borne pathogen at least. Maybe a freak cold brew fight accident, but definitely not bacteria.