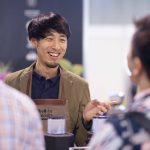 When I first saw Tetsu Kasuya at the Japan Brewers Cup Championship, I was most surprised by his approach. Among a field of baristas and coffee specialists using complicated methods—two filters for one extraction, specially made ceramic tools, fancy and complicated recipes—Kasuya’s presentation was a fairly simple and quick AeroPress recipe.

I remember him saying something along the lines that he didn’t want to over-complicate things. He wanted to be able to easily recreate the experience for customers visiting his cafe, and for them to easily replicate his method at home.

The words echoed around in my head on the train ride home. While the other competitors pursued perfect flavor by any means and indulged in extravagant ideas, Kasuya had placed a boundary on his methods the moment he decided his theme would be finding the simplest way to brew fantastic coffee.

And yet, he still won. Much later, I decided to investigate why Kasuya took this approach. What I found was that although simplicity is often a part of Kasuya’s approach to coffee, getting there has required a serious dedication to the craft; a dedication that, surprisingly, started at the hospital.

At age twenty-seven, Kasuya was diagnosed with Type 2 diabetes. Then working as an IT consultant, Kasuya’s diagnosis forced a change of perspective. He found himself looking more closely at his life, and the life he wanted to lead.

“I thought [coffee] was interesting, and so I bought what I needed for pour-over coffee, and looked up recipes on the internet. It was really bad, and I wanted to know why my coffee tasted worse than what I drank at the cafe. That got me thinking about how I was brewing,” said Kasuya, and that pulled him into turning his passion into a career.

“I knew that if I was told I would die tomorrow, I’d wish I’d done something different [with my life.] I decided to put a focus on enjoying life. This is the result,” he says with a laugh.

Not long after starting a job at Coffee Factory in Ibaraki Prefecture, Kasuya visited plantations in Guatemala and Honduras. Seeing the farms and the efforts of the farmers instilled in him a sense of responsibility. He felt a desire to share their life’s work, and to spread it as far as he could.

This train of thought led him to the competition circuit.

“I wanted to share my knowledge and craft with people, but a barista’s sphere of influence is limited to the people who visit their shop. But if you become the best in Japan, you can potentially reach the whole country, and if you become a world champion, that sphere expands even further. I realized that if I wanted to reach people, I needed to become famous.” Kasuya says that experimentation and trial and error have been key to his improvement. His approach is one of constant thought and adjustment; he creates a hypothesis, tests it, records the results, and decides on adjustments immediately.

Following these snaking paths to perfect flavors allowed for Kasuya to craft and hone a variety of messages to share with people through competitions including latte art competitions, AeroPress competitions, and of course, the World Brewers Cup Championship.

And though his search for coffee recipes still involves much thought and experimentation, Kasuya ultimately leans towards simplicity in his work.

“Coffee is a very simple drink,” he says. “It’s water over grounds, which extracts the coffee. The act of brewing is simply controlling that extraction, and making fine adjustments towards your preferred extraction.”

Kasuya now sees coffee as a means of self-expression and communication. It’s through coffee that he’s connected with other people, and shared thoughts and ideas across the world. It’s also the key to those simple—if fleeting—moments of genuine happiness. “Brewing a really good cup of coffee is the kind of happiness that can’t be touched,” Kasuya says. “And to be honest, I can’t do it often. I think I’ve brewed really great coffee only two or three times. The cups I brewed at the Brewers Cup and the World AeroPress Championship? They were good cups of coffee.”

And after thinking for a moment, he adds, “That happiness is linked to my effort; it’s an expression of my thoughts and feelings in a cup.”

Special thanks to The Coffee Elementary School for the use of their cafe!