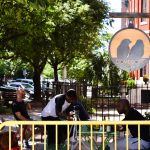 The experience of visiting Dovecote Cafe, in the predominantly Black Reservoir Hill neighborhood of Baltimore, Maryland, starts before you walk in the door. Children are out playing on sidewalks; folks outside pause their conversations briefly to greet you. The warmness on this block carries through into the cafe itself, an intimate space that acts as an incubator for conversations, sometimes held across the room. Regulars are also neighbors. It feels like you’ve just walked into someone’s living room and their entire family is there to hang out. The effect is less like patronizing a cafe, and more like you’re going to your cousin’s house—the cousin you do like.

Black folks in America grow up in communal spaces like this, where the throwback R&B tracks are loud (think cafe-wide sing-a-longs), conversations are dynamic and lively, and even if we’re minding our own business, we still look out for and take care of each other. Much has been made about the specialty coffee bar as a new sort of “third space,” and Dovecote has found incredible success here in Baltimore by putting its community first, in a cafe space that is unapologetically, authentically Black. Aisha Pew, one of the three owners of Dovecote along with her partner, Cole, and mother, Gilda Pew, didn’t set out in life with the plan to open a cafe. Working in corporate America, she moved around a lot—first to Brooklyn, and then to Oakland, where she met Cole. “We were ready to move from Oakland, really just running away from gentrification [since] I’m from Brooklyn and Cole’s from DC,” Pew explains. “We were living nomadically and reached a point like, ‘We gotta get out of here, but where do we go?” The couple knew they wanted to set down roots somewhere together by establishing a business.

The result was their choice to move to Reservoir Hill, a majority Black neighborhood just a few miles from Baltimore’s iconic Inner Harbor. Pew started searching for vacant businesses, and soon found a cafe space for sale. The couple jumped in with both feet, closing on a house and buying the cafe within a few short weeks. “The space was vacant for six years before we got it,” Pew tells me, remembering some of the projects’ early skepticism. “People would come in and tell us the rent was too expensive, or ‘no one around here buys coffee.’” It is a pervasive and baffling stereotype, the one that says Black people don’t drink coffee, and Pew and Cole heard their share of it in the early days of Dovecote. Pew is still amused when the topic comes up: “[One of the] highest grossing Starbucks is on 125th Street in Harlem! You can’t say Black people don’t drink coffee.”

Stereotypes and stigmas be damned, the cafe model and opportunity in Reservoir Hill offered the couple an opportunity to do something more. This idea and essence of the “third place” drove their motivation for opening one. “We don’t run cafes,” Pew tells me. “We create community third spaces.” What happened next is a familiar narrative in today’s coffee scene. Dovecote’s first cafe on Madison is a hit, and proved that cafe retail can survive—even thrive—in the heart of Reservoir Hill. Now the houses along the same street where that Dovecote sits are experiencing price increases, and local reporters namedrop Dovecote as being part of inspiring that increase. This is a good thing for longstanding property owners in the neighborhood—many of whom are Black—but now the rest of Baltimore is paying attention, and new residents are moving in to be part of the growingly hip scene.

So, you’ve opened a cafe dedicated to fostering community and creating a thriving third space for a historically Black neighborhood you’re not originally from. The cafe works; rents increase around you; the neighborhood gets buzzy. How will you, someone new to the neighborhood, maintain the spirit that drove you in the first place? How will you bring value to and enrich the people already living there without gentrifying it and displacing the original neighbors?

There might not be a simple answer for this, but at Dovecote the approach so far to these gentrification issues has been refreshingly real. Pew puts it pretty bluntly: “We try to be Black as fuck.”

At Dovecote, that means loud, proud music (the cafe has a resident DJ that comes in on the weekends and for events), openly engaging in conversation about race and gentrification, and showing a wide array of what Blackness looks like, particularly in the folks who work there. It’s not to say you can’t work quietly on your computer here, but frankly, Dovecote is not the space for that. This cafe is so vividly, obviously different in vibe and character to most of the rest of the coffee scene right now—that includes other cafes in Baltimore, and other places getting featured on this website. But the Dovecote team’s success deserves more credit than just being Black cafe owners in a Black neighborhood. They’ve been thoughtful and intentional in engaging the existing community, offering themselves up as a conduit for the community’s needs. In addition to having a true-to-self, inclusive space, community impact is hugely important to the values of Dovecote. On Thursdays, the cafe hosts a free produce pop-up, frequently highlights Black artists, musicians, and chefs, and offers weekly outdoor yoga sessions. The first Monday of every month is designated a “self-cafe” (playing off “self-care”) day, so it remains closed for employees to take the day off. Dovecote doesn’t plan to stop there, either. A road is already mapped out for furthering its impact on the community, both within Reservoir Hill and beyond. Plans are underway to continue cultivating art and creativity, health and wellness, and food access in the Black community through more businesses—namely a creative live/work space for artists, a modern dojo concept offering wellness activities like yoga and martial arts, and a bodega-style grocery store with fresh produce.

Expanding Dovecote Cafe into a franchise is now a hot topic of discussion, but like any brand looking to expand, the process raises several questions. “What does a new-age franchise look like?” Pew wonders out loud. “We want to be specific about what neighborhoods we go in to. How do we provide amenities for the people who live in that neighborhood?” They don’t want to be the Black cafe Starbucks, but you may very well see new Dovecote cafes open in Baltimore in the coming months.

In the meantime, Dovecote will continue to do what it can where it is with the needs of the community as its guiding light. “Businesses that are for-profit are generally run by basic supply-and-demand, and your profit line is your bottom line,” Pew tells me. “But if you’re interested in community and social impact, you have to create a value for that. Monetary results driving your decisions can be detrimental to any value-based business.” One of the most refreshing things about this space is that it prides authenticity and connection for its staff. Dovecote does not offer sterile, pre-defined norms of generic customer service. What’s happening here is so much more human than all that. “You better speak to me when I come in!” she laughs, and I know what she means. I want to end this on a note of inclusivity, because while Dovecote is an unapologetically Black cafe, anyone who happens into the space will be most welcome there. You might not share the same experiences—hanging out at that sweet cousin’s house with early 90s R&B blasting through the speakers, the front door never resting for more than a second or two—but that’s alright. The folks at Dovecote Cafe will make you feel like it’s right where you belong, like you’re part of the family. Here, your humanity comes first; who you are comes first. It’s an approach to inclusivity within reach for everyone.

This is the work: cafe owners being thoughtful and intentional in approaching the communities they’re apart of. The rest will nestle into place.