De:Constructed: A Night Of Coffee And Sneakers In Portland 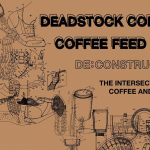 You may think that sneakerheads would be the last people to be super into coffee, because you know, that brown liquid is just itching to stain to pristine kicks. But you’d be wrong. (Maybe you didn’t think that at all or you stayed agnostic on the coffee beliefs of sneakerheads, and that’s ok too). In fact, coffee is chock full of fly dressers, at least from the ankles down. And in Portland next week, there’s an event with this cross-section in mind. It’s called De:Constructed and it’s all about coffee and sneakers.

Taking place Wednesday at the expanded new Deadstock Coffee, De:Constructed is “the intersection between coffee and sneakers” and will feature “unique drinks,” sneakers “broken down to their basics,” and talks from “some of the game changers in the community.”

Sharing the co-hosting duties along with Deadstock is Coffee Feed PDX, whose Giovanni Fillari will be the moderator for a panel discussion that includes: Ian Williams (Deadstock Coffee), Zan Derven (Tailored Roasters), and Brett Felchner (Barista Portland).

The event kicks off at 6:00pm and the best part is, it’s free to attend! But if you are a kind soul who understands the logistical nightmares of planning events and want to help the hosts establish a more accurate headcount, you can RSVP for the event through the De:Constructed Eventbrite page.

It’s going to be a kickin’ event. So go drink some coffee and check out some shoes. But do NOT, and I can’t be more clear about this, do NOT spill a single drop of liquid.

The post De:Constructed: A Night Of Coffee And Sneakers In Portland appeared first on Sprudge.