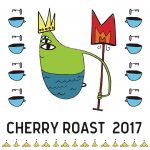 In the wake of SCA’s controversial decision to schedule (then suspend) several World Coffee Events competitions in Dubai—a country with well-documented human rights abuses including state-sponsored slavery and legislation that criminalizes queerness—a smaller, if no less important new coffee competition has made a major move for inclusiveness. That would be Cherry Roast, formerly an all-woman coffee competition based in Denver, which has decided to open its doors further to include nonbinary and transmasculine people in 2017. The event takes place at Commonwealth Coffee (5225 E. 38th St) the evening of November 14th.

Cherry Roast creator and Amethyst Coffee Co owner Elle Jensen (formerly Elle Taylor) founded Cherry Roast in 2015, inspired by all the women supporting her through competition who did not feel comfortable competing themselves. “I always had women come up to me and say how awesome it was that I competed and how they were rooting for me,” said Jensen. “I would ask if they would ever compete and they would always express some kind of sentiment about being too nervous or unsure. I wanted to find a way to start encouraging more women to compete.” Competition is a powerful way to be visible as a coffee professional, and Jensen felt like the SCA competition model was too intimidating for many women. “It made me sad to think there was no approachable way to get a taste of competition without spending a ton of money and putting yourself on a regional or national stage. That is certainly not for everyone.” But, after meeting and befriending more nonbinary and gender-nonconforming coffee workers, she realized that by not including other non-female marginalized people, her alternative competition was at risk of becoming yet another unapproachable coffee event.

This year, she wants to be clear and intentional about using this competition to create space in the industry for all people in coffee who have been marginalized because of their gender, not just women. Jensen felt like SCA’s announcement was the perfect moment to open the competition to all people who are marginalized in mainstream coffee competitions, not just those who identify female. Entry for Cherry Roast costs $20, all of which goes to the International Women’s Coffee Alliance. The competition has grown since year one, and this year Jensen expects around 25-30 competitors. Structurally, Cherry Roast has four rounds: competitors start with a triangulation, with the top 10 moving on to a brewing and latte art round. The top five from that round head into another, more difficult triangulation and a challenge called The Order, where they have 13 minutes to dial in and make five drinks, with the top three competitors moving on to the final round. There, they face a Pandora’s Box signature drink round: presented with three mystery ingredients, they can use espresso or brewed coffee from a previous round to make a drink in eight minutes while being judged on creativity, reason for brew method, professionalism, and flavor balance. Unlike SCA’s competitions, which are subdivided by professional category (espresso, brewed coffee, tasting, and roasting), Cherry Roast provides a veritable gauntlet of challenges relating to the many skillsets a barista will need to use on a regular basis, from tasting to brewing to presentation to crafting signature beverages on the spot, all in a tight timeframe.

Gearing up for this year’s events, Jensen hopes that Cherry Roast can not only help uplift coffee folks, but also just be a fun way to connect and blow off steam. “Just because we’re professionals, doesn’t mean we have to take ourselves too seriously,” Jensen tells me. “Spending more time together, collaborating on professional development, and learning how to be genuinely happy for one another when someone else succeeds will go a long way. I hope that Cherry Roast can instill confidence in baristas who feel overshadowed and help everyone feel seen and valued by their local community.” When Jensen founded Cherry Roast in 2015, she was the sole organizer; this year she’s joined by Kristyn Wade and past winners Breezy Sanchez and Johanna Hirschboeck. Eventually, Jensen hopes Cherry Roast will continue to grow organically into a multi-city event driven by local communities.

As the coffee community looks to SCA leadership to prioritize the needs and presence of transgender, non-white, and female coffee workers in coffee events, Cherry Roast is a stellar example of how coffee workers themselves can drive events from the ground up and create meaningful change at a local level. Its organizers hope it can provide a healthy model for coffee competitions that center marginalized people and engage their professional growth and development. If nothing else, it’s a great way for baristas in Denver to show off their skills and have a good time making coffee.

The post Competing For Inclusiveness At Denver’s Cherry Roast appeared first on Sprudge.