Cogito Coffee And The Rise Of Specialty Coffee In Croatia 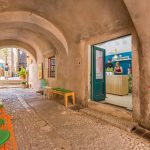 Croatia, now a coveted European travel destination, has always been rather wintery on the coffee scene. For decades it drank coffee like a classic Eastern European country—very, very hot. But, since joining the European Union and inviting in tourists from all over the globe, the sea-loving country has embraced their own new wave of coffee culture. One of the pioneers in the space is Cogito Coffee—“to think” works perfectly in both Croatian and in English.

“Seven years ago my wife, Hannah Powlison Belković, and I opened a coffee shop in downtown Zagreb called ‘Cafe u Dvoristu’ (a cafe in the courtyard),” says Matija Belković, co-owner of Cogito. “At the time this was one of two coffee shops in Zagreb that insisted on serving quality coffee.” Soon after they opened their doors, and showed the Croats how the rest of the world was experiencing specialty coffee, Matija Hrkać, one of Croatia’s best-known baristas, began hanging around regularly. It didn’t take long for the three to join forces and create Cogito. “Six months later we opened a small coffee shop under that brand in downtown Zagreb,” Belković says. “Right now we have a growing network of wholesale clients as well as five of our own Cogito Coffee shops. Three of them are in Zagreb, and the other two are on the Croatian coast—in the cities of Zadar and, the latest, in Dubrovnik.”

The city of Dubrovnik, known for its fortressed walls and as a “Game of Thrones” location, is having a happy revitalization. “We felt that the coffee scene on the Croatian coast does not match the other gastronomical standards in the region,” Belković says. “While you can have great seafood and wine, finding a decent cup of coffee on the Croatian coast was next to impossible.” Of course, this is the perfect setting for a story of coffee triumph—dragons, or no dragons. “One of the biggest challenges for us is that we are in many ways alone on the scene,” Belković says. “But so whatever we do on the scene makes a real impact, and we feel that our company is becoming competent in helping to shape the future of the local coffee scene. It is exciting to have the power and responsibility of introducing people to speciality coffee.”

And so they have attracted a fascinating medley of characters—a hip crowd of coffee cognoscenti, plus the neighborhood’s darlings and dappers. “The demographic is diverse, which tells us that the coffee and service takes precedence over lifestyle,” Belković says. For Croats, specialty coffee isn’t anywhere close to the status quo, and so a narrative driven by Cogito in a sustainable and authentic way is the real paragon here. “In a weird sort of way it is equally exciting to get the two totally different responses: ‘this is the best coffee I ever had’ or ‘this is the worst thing I ever tasted’—we rarely encounter anything in between,” Belković smiles. “While we are not really into the models of Italian and Austrian coffee cultures, one thing we really want to preserve—which we got from those neighboring countries—is the fact that coffee is consumed on the premises and is primarily a social experience,” Belković says. “Croatians rarely drink coffee on the go, instead taking our time to enjoy it, often with friends.” Which is partly why Cogito’s locations are opened in unique spaces—like a back alley, or a courtyard, or even a very quiet street. For Cogito, it’s about creating a “destination” for customers.

“We serve two coffees that are season dependent, from our supplier Nordic Approach: our house blend (Tesla blend) and a single estate coffee that we rotate daily. We also brew filter coffees in Chemex and V60,” Belković says. “For roasting we use a Diedrich IR7, though we are in a process of upgrading to a different and bigger roaster (Probat UG22), as we feel that this type of roaster will be better suited to our preferred roasting style.”

And this fits in perfectly with their next season, expanding their wholesale footprint throughout the country. “One specific goal within the next two years is to invest into the farm-end of the production chain—to be constantly in touch with our coffee producers (especially in East Africa), develop long-lasting commitments and relationships with specific producers,” Belković says. This is good news not just for Cogito, but for Croatian coffee more broadly—as Cogito goes, so does the rest of the country.

The post Cogito Coffee And The Rise Of Specialty Coffee In Croatia appeared first on Sprudge.