Coffeeography: The Coffee Producers Is A New Book By Stephen Leighton 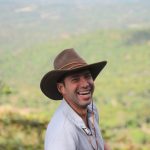 Stephen Leighton is a man of many endeavors. The founder of the UK’s Hasbean Coffee, co-owner of both 3FE and Drop Coffee, and co-creator of coffee podcast and event series Tamper Tantrum, Leighton is perhaps most recognizable for his sartorial decisions while emceeing the World Barista Championship (think bright red suit with matching wingtip shoes). But for his most recent undertaking, Leighton—one of coffee’s biggest personalities—is moving behind the scenes and into the role of author with his new book, Coffeeography: The Coffee Producers.

As the name suggests, the book is a collection of photographs and stories Leighton accrued over his extensive travels to origin. According to the press release, the book “offers a comprehensive look into the histories and stories of 40 coffee producers across 11 countries by using an approach that brings their own words and experiences to the fore.”

“Each profile began with a list of 20 questions, anything from ‘do you prefer espresso or filter?’ or ‘if you could farm anywhere else, where would you?’”, says Leighton. “From there, it was using their answers to those questions, the stories they chose to share, and my own understanding of our relationship to put together a multifaceted glimpse into the complex people behind the future of specialty coffee.”

Leighton goes on to note that this book gave him the perfect chance to go through the near 32,000 origin photos he has collected throughout his years of travel.

Coffeeography: The Coffee Producers will officially be released on Sunday, November 5th at the Manchester Coffee Festival and will be followed up with a five-country book tour throughout the month. This will of course include a stop in Seoul, South Korea for Cafe Show Seoul, the host of the 2017 World Barista Championship.

The book retails for £20.00/€25.00/$30.00 and will be made available through local distributors 3FE (Ireland), Drop Coffee (Sweden), Eight Ounce Coffee (Canada), Cafe Demitasse (USA), and Toby’s Estate (Australia). Or, it can be purchased directly via the official Coffeeography website.

For more information on the book, the tour dates, or to purchase a copy, visit Coffeeography: The Coffee Producers’ official website.

The post Coffeeography: The Coffee Producers Is A New Book By Stephen Leighton appeared first on Sprudge.