Coffee May Affect How You Perceive Sweetness 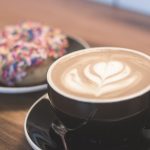 Coffee is sweet. Totally. But according to the Huffington Post, new research suggests that drinking coffee may decrease you ability to taste sweetness, which may make you crave more sweet things. Less Sweet.

Conducted by Cornell University assistant professor of food science Robin Dando and published in the Journal of Food Science, the blind study split 107 participants into two groups: regular and decaf (or more precisely, decaf-with-200mg-caffeine-added and decaf). The same amount of sugar was added to each group’s coffee, but the decaf group consistently rated their coffee as tasting sweeter than the caffeinated group.

According to Professor Dando:

“When you drink caffeinated coffee, it will change how you perceive taste ― for however long that effect lasts,” she said in a statement. “So if you eat food directly after drinking a caffeinated coffee or other caffeinated drinks, you will likely perceive food differently.”

Based on previous research, Dando theorized that this perceived lack of sweetness may lead craving sweet things later on.

Now, not to be a complete coffee homer here, but the caffeinated coffee being perceived as less sweet may be due to the addition of pure caffeine, which has a bitter flavor. It may not be perception at all. The coffee may just not be as sweet. I dunno. Just a thought.

Another interesting finding from the experiment was that neither group—the regular or the decaf—were able to determine the amount of caffeine in their coffee and both “reported the same increase in alertness on average.” The study found that there may be a placebo effect of drinking coffee.

Or as one Sprudge shirt suggests, decaf may actually give you life.

The post Coffee May Affect How You Perceive Sweetness appeared first on Sprudge.