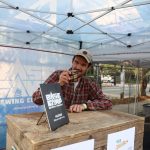 There’s just something about the onset of Autumn. The air changes, the light feels a little different, and the beer? It tastes better, somehow and inarguably. And so it was on a late summer Saturday, as the seasons shifted all around us, that we found ourselves hosting our first ever festival of coffee beers alongside Stumptown Coffee Roasters. Coffee Loves Beer was a celebration of unique coffee beers, drawing on the collaborative skill and intuition of the team at Stumptown Cold Brew and a dozen or so of the Pacific Northwest’s best breweries. We came, we schlepped ice buckets, we hoped folks would show up and have a nice time, and hot damn if y’all didn’t come through in droves—several hundred of our closest friends packing out a parking lot of SE Division for a day of diverse and uniformly wonderful coffee beer creations, plus all-you-can slurp oysters from Hama Hama and a cheeky Ranier or three.

Recapping Coffee Loves Beer is a joy for us. We dug all these beers! There were no stinkers in this bunch—all killer, no filler—so let’s take a look back at some of our very favorites with a special message for those who read straight through to the end. [Spoiler alert: we’re doing more of these, because coffee beer is awesome and people loved partying at this fest. Stay tuned for more coffee beer events announcements from Sprudge in the coming weeks.] There was considerable early hype around Breakside‘s offering at Coffee Loves Beer, the delightfully named “Guji, Guji, Louis, Louis, Fendi, Fendi, Prada”—and the beer didn’t disappoint, delivering complex layers of Gose coriander and sea salt, tempered by Stumptown’s Ethiopia Guji cold brew. There was a buzzy line around Breakside’s stand all day, but not to be outdone, local cult favorites Cascade Brewing offered another incredible beer for the weekend: the Holler Mountain Sour. Sours are what Cascade is known for, and this was the beer that kept fest-goers coming back for third and fourth pours, so utterly balanced and effortlessly executed.

Throughout the day we noticed a super-secret off-menu pairing gaining viral mindshare across fest goers, and it went a little something like this: take a splash of that Cascade Holler, and pour it straight into one of the fresh-shucked oyster shells from Hama Hama. The result? Like a perfectly bright mignonette. Somebody get this onto a restaurant menu, stat. We’ve also got tons of respect for the more widely available beers exhibited at Coffee Loves Beer, including Rogue‘s Cold Brew IPA, Ninkasi‘s Noir Milk Stout, and Elysian Brewing‘s Punkaccino coffee pumpkin beer. A note on that last one: Punkaccino was the last beer I tried at the fest, and the beer around which I had perhaps the fewest expectations. I feel like I, like a lot of beer drinkers, have tried myself a more than fair share of pumpkin ales that taste like somebody melted down a Yankee Candle into a boring ass brown beer. I tend to avoid the stuff; pour me a Märzen come October and let’s skip the seasonal schtick. But wow, this Elysian beer—so totally good and moreish, hinting at pumpkin pie spice and vanilla but never overwhelmed or fake, and totally integrated into something balanced and beautiful. Elysian’s Punkaccino was actually my favorite thing I tried at the fest, and with stiff competition that’s really saying something.

Happily this beer, along with these Ninkasi and Rogue beers, are available in the bottle for beer loves to purchase and savor. If you’re looking to try a glass of something that is both simultaneously an excellent coffee beer and an excellent pumpkin beer, that Punkaccino is not to be missed. There was so much more fun stuff happening at this fest! Cute babies, cute dogs, nice people representing a lovely cross-section of Portland, friends and collaborators visiting from far afield, and good vibes, so many good vibes. Our biggest takeaway from Coffee Loves Beer is that we want to do this more, so we’re going to do more of this. We’re working now on another coffee beer festival concept coming to the Midwest in early 2018, and if you’re a brewery, coffee roaster, or coffee beer enthusiast looking to get involved in an upcoming event, you should please please get in touch with us so we can talk more. More coffee beer! More fun! More friends! More, we say. Hang those who talk of less. A huge thank you to the hardworking, Yeti-lugging, ass-kicking team at Stumptown for their vision and hospitality in putting on this incredible event. To our brewery partners, thank you a million times over—and yes, let’s do it again in 2018. Put that on your calendar.

Coffee Loves Beer, beer loves coffee, and we love you most of all.